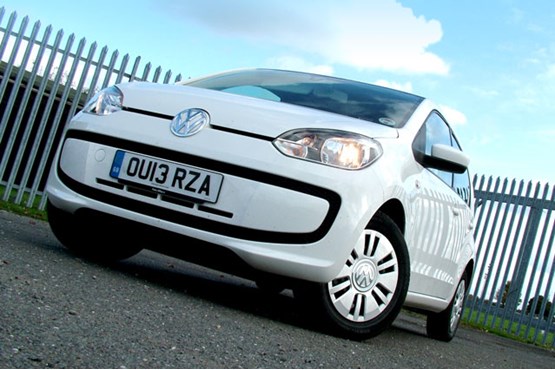 There’s something about the Volkswagen Up that captures the same spirit as iconic models such as the Camper and the Beetle. Holding the Up in that company is perhaps sacrilegious, but it is infinitely funkier than VW’s Fox model, which failed to capture the imaginations of customers looking for their next little runabout.

While those thinking with their head would probably look to save £1,000 and go with the Up’s sister model, the Skoda Citigo, the prestige from the VW badge will likely convert most. The interior is also a significant plus point for the Up in comparison with the Citigo or its other sister model, the Seat Mii.

The design appeals to a broader audience too, which means dealers will have a larger potential customer base compared with rivals such as the Ford Ka and Fiat 500, which have strong female followings.

For less than £10,000, you get a peppy three-cylinder petrol that is more than adequate for pootling around town and performs surprisingly well on motorway trips. It is a bit loud when pushing 70mph but is not as noticeable as you may expect. The 14.4 seconds  for accelerating from 0-60mph looks horrendous on paper, but it doesn’t feel as sluggish in practice.

The cost of ownership is another plus point for young drivers, with no road tax to pay in the first year (£55 from the second year and beyond) and it is capable of 62.8mpg.

The mid-range Move Up trim level is quite basic, but includes safety systems you would expect including ABS, ESP, driver and front passenger airbags and there’s an auxiliary in socket for MP3 players. Standard design touches also include black pearl upper dashboard and chrome-trimmed door handles. AM’s long-termer includes the Maps and More navigation and infotainment package, which is good value at £325 for a touch-screen system, in comparison with many manufacturer-fitted sat navs that can cost £1,000-plus.

There’s also a City emergency braking pack, including front passenger’s airbag deactivation for £225. This system stops the car automatically at low speeds to prevent shunts and bumps. The Candy White paint is £250.

The Up doesn’t hold significant profit opportunities for dealers, but is a great entry into the brand – something VW’s product portfolio has lacked for years.

The Volkswagen Up is the best city car on the market – it’s great to drive, classy and spacious to sit in, and has a desirable image. In fact, it’s our City Car of the Year 2013.

The Up is a fine example of VW’s coolly calculated approach to market success. Consider it as a model to replace the Fox and it’s demonstrably more accomplished than its predecessor. In fact, the Up is among the class leaders.