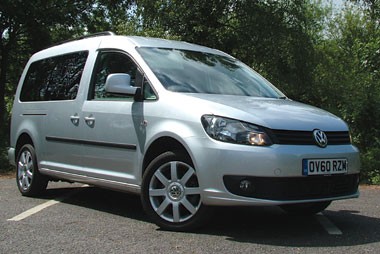 The Caddy has joined the Porsche Panamera and Bentley Continental on an unusual, exclusive list, set apart from the dozens of cars I’ve driven during the past two years.

The trio are linked by the fact my neighbours and their three children all insisted on being taken for a drive in them. So, one Saturday afternoon the Caddy Maxi was ‘stuffed to the max’.

Five of them (I think a pet tortoise was smuggled on board too), plus my partner took to the country lanes around Peterborough for 30 minutes.

VW says the appeal to the consumer of the van with seats against competitors such as the Citroën Berlingo Multispace, Renault Kangoo and Fiat Doblo is its brand, quality and values, competitive pricing, economical diesel engines, BlueMotion technology and high levels of standard spec.

During our half hour trip it was more about the roominess despite every seat being occupied, the cubby holes, the sense of community of so many in such a small space – it was all we could do not to start singing.

One of the reasons we didn’t was the Caddy doesn’t come with a iPod socket – surely a must-have for today’s driver, particularly if you’re carrying a crowd?

Another niggle is the rudimentary seat folding mechanisms – a little lacking in grace when in a hurry to get young people comfortable or making room in the cavernous rear for luggage.

While not the most powerful engine in the Caddy range (that’s the 2.0 TDI 140), the 1.6 sang its own song, coping remarkably well with the weight and handling was excellent on the rural twists and turns.

The height of the Caddy, giving excellent head room for all, didn’t lead to an excess of yaw on the corners.

Proof of the appeal of the vehicle came when we arrived home – the kids said their neighbours were now “cool”.

Not a promise a salesperson could offer a potential customer, but a demonstration that compliments can be inspired by the most surprising vehicles. It’s not always about the Porsches and Bentleys of this world.

There does appear to be a little reticence on VW’s behalf to shout about the merits of the Caddy as a family car as opposed to a commercial vehicle.

A search of Google for our particular vehicle or just the model name turned up links to the van only. VW had done its SEO work effectively – it was at the top of the results, but then Google returned links to consumer and dealer websites offering roadtest and pricing information.