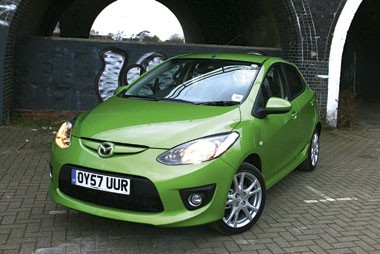 The squeak returns. Early in our relationship with the Mazda2, we took it to Donald’s dealership in Peterborough after an annoying creaking noise developed in the driver’s seat.

It was silenced for a while but it’s back with a vengeance, and the accompanying quite bouncy ride makes it reminiscent of some old jalopy making its way along the wagon trail.

Anything less like a jalopy, however, would be hard to imagine.

My son, a mature student of 25, is about to look for a new car and he sprang to mind as soon as I set eyes on the funky little Mazda2.

Once behind the wheel, I was even more certain that he would love it.

He is set on buying a new car, despite widely-held opinion that it would be more sensible to buy after initial depreciation, so he will need to find something within his budget and with excellent fuel economy for his daily college commute.

Our top-of-the-range Sport has lots of extra kit, including 16-inch alloy wheels and special sports bumpers, side skirts and rear tailgate spoiler.