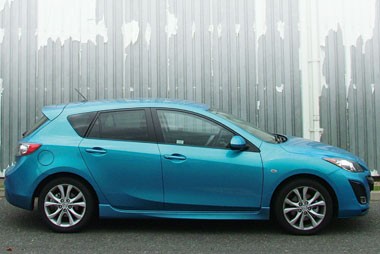 The Mazda3 is coming up close to its service and it’s not that long until the team will have to say goodbye to this fun to drive workhorse.

We’re still 1,400 miles away from the annual service, but a prompt came up on the information display above the steering wheel to remind us to book it in to our local dealer.

Expectations for the service process are high after Mazda came top in the latest UK Customer Satisfaction Index, scoring the highest of the automotive sector with 83.3%, well ahead of the car industry average of 78.4%.

Looking back at concerns raised when we first took on the Mazda3 last year, some members of the team doubted how well it might stand up to interior scuffs and scrapes, but it’s handled some quite heavy use valiantly after almost a year with the team.

The 2.2-litre diesel engine is still pro-viding pleasing amounts of performance and returning around 50mpg.

Mazda dealers will be pleased to know that with the addition of new Skyactiv technology next year the performance and economy figures are only going to improve further.

Mazda is looking to turn the 70%/30% waste/energy ratio of the internal combustion engine on its head.

Just as well, as new petrol engines being released into the market like Ford’s EcoBoost mean that the cost of diesel and buying a diesel derivative is getting harder to justify.