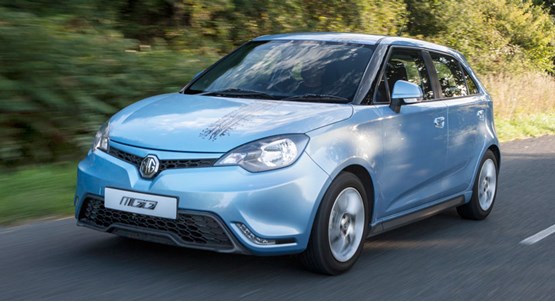 At last, MG Motor UK has a new car that will help it gain some traction in the market and attract more dealers to the fledgling franchise. Last month, the MG3 supermini went on sale in the UK’s most popular car segment with a real surprise up its sleeve: it’s cheap, but by no means nasty.

This is a model line-up that starts at £8,399 for a no-frills small family hatchback and rises to £9,999 for one with decent levels of kit and style. That positions its high-level derivative just £4 more expensive than the list price of a poverty-spec Ford Fiesta or Kia Rio.

Even with the extensive personalisation options offered, from graphic packs and special paint colours to a lux pack with leather-faced upholstery, MG expects the maximum any customer would pay for this 105bhp 1.5-litre hatchback to be £11,500.

The carmaker admits the crucial role of the £8,399 3Time derivative, whose few highlights include LED lights and a CD-player, is to enable it to advertise the new car on price and get prospective buyers into showrooms. Some of these will include customers who bought Kias when they were cheap.

MG dealers are then charged with selling those prospects into the 3Form, which for £9,299 offers air-con, Bluetooth, DAB radio, a multi-function leather steering wheel and height-adjustable driver’s seat plus a rear spoiler. A £250 Sport pack can add alloy wheels and sideskirts. The 3Form with Sport pack is expected to be the most popular derivative.

Above that model sits the £9,999 3Style, which comes with a sporty bodykit, automatic headlamps and wipers, rear parking sensors, cruise control and alloys, to which a £500 Lux pack adds a part-leather interior. This will be the most profitable vehicle for the MG dealer, said Guy Jones, MG Motor UK sales and marketing director.

“With all models in the range priced below £10,000 and group 4E insurance, no other manufacturer can match us on value,” he said. Finance products include a £99-  monthly PCP after a 31% deposit.

Yet Jones knows price alone won’t sell the MG3. “This car will fit with what people expect of MG,” he said. Styling is one of the major influencers in the new car purchase decision, and this car was largely designed and engineered by the Birmingham-based team working for MG’s Chinese parent, SAIC.

It’s assembled in Birmingham too, after being shipped in kit form from China. Their work has ensured it handles rather nicely, can seat four adults in comfort and its fit and finish is more than acceptable.

In fact its greatest weakness is its engine. While powerful enough, it requires quite a thrashing and is a noisy unit, which can’t match the low emissions and fuel economy of its more expensive rivals. At current rates, it’ll cost owners £95 a year more in road tax than the cheapest Fiesta. Yet it’ll also leave the Ford behind when the lights turn green.

All in all, it’s pretty good and the sales targets of 1,730 MG3s in year one (about four units per month per dealership) and 2,630 in subsequent years seem quite achievable.

What’s been said about the MG3

Daily Telegraph
No Fiesta-beater, but at these prices the MG3 punches above its weight, particularly with its fine handling and spacious cabin.

Auto Express
This car will make a lot of sense for young, first-time buyers. It sits in insurance group 4E, will cost less than £10,000 (unless you go crazy with options) and you can really make it stand out from the crowd. Although it’s not perfect, there’s no reason why the MG3 won’t succeed.

Refreshed MG6 turbodiesel does not match up to rivals on emissions or interior.