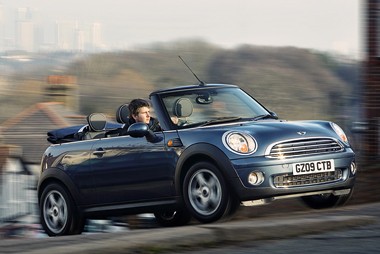 In a sector where style is paramount, Mini has opted not to change a winning formula with its new Convertible.

At first glance it’s hard to distinguish it from its predecessor, but the familiar looks hide a number of changes – including higher body sides and rear rollover protection bars hidden inside, popping up only in an emergency.

Without being able to rely on new styling, Mini owner BMW says the convertible stands out against its competitors by having four viable seats, being suitable for families and fun to drive.

Customisation is also a big thing for Mini customers, which adds saleability over cars such as Mazda MX-5 and Peugeot 207CC.

On sale in March, it has taken a while to arrive: Mini Mk 2 originally hit the market in 2006.

The customer base varies, said Lee Connolly, product manager. Buyers can be anyone from an 18-year-old to a Porsche owner downsizing. Females do account for up to 63% of convertible buyers though.

The new convertible is greener than its predecessor, with fuel consumption and CO2 of the Cooper and S improved by 22% and 23% respectively. Automatic stop-start taken from BMW EfficientDynamics has also been implemented.

There are two key upsell areas for dealers.

As a fashionable car with many opportunities to customise, average spend on options is £2,500.

Customers are also sent a catalogue post-purchase to ensure they know what options are available.

The convertible now comes with a six-speed gearbox as standard, as well as a lockable glovebox with air con to keep some cheese and rosé cool in the heat.

The soft top opens and closes in speeds up to 20mph while a fun ‘openometer’, a £115 option, records the time the roof has been open for the lifetime of the car.

Car Magazine
There’s loads of fun to be had wringing out the urge via the snicky six-speed manual box, yet the engine never feels stretched.

Auto Express
While the Cooper feels a little underpowered, the Cooper S offers an excellent blend of performance and practicality. Handling is tight and precise.

Daily Telegraph
All are great to drive and perfectly practical. With a £180 wind deflector fitted, top down, high speed cruising is surprisingly buffet-free.