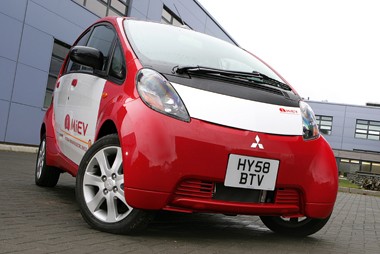 Mitsubishi’s electric proposition is really the only one so far that makes sense from a practical stand- point. While the Mini E might be better in the looks and prestige department, the I Miev will seat four adults comfortably and, most importantly, drives just like a normal car.

The electric I Miev pronounced “meeve” is powered by an 88-cell fully sealed lithium ion battery which is bolted to the underside of the car, giving it exactly the same interior space as the original petrol version.

UK customers will initially have to use the trickle charge through any standard household three-pin plug to power up their car, which will take six hours for an 80% charge from flat. The I Miev has an 80-mile range when fully topped up, which is more than enough for a daily commute within a city.

There is the option of a fast charge which will reach 80% in 20 minutes, but that’s only through quick chargers which are yet to be installed across the UK. Mitsubishi is working with the government to push plans for an electronic charging infrastructure, but it’s going to take several years before customers can top up at Tesco while they shop.

The I Miev is eerily quiet when setting off, so much so that there’s a light on the dash to alert the driver that the car is ready to go. There are three main modes on the auto transmission: drive, eco and brake.

Drive mode is the default setting which is used for swift acceleration, overtaking and reaching 70mph, which is surprisingly easy.

Eco cuts the power from 47kw to 18kw for driving in the city centre and the battery automatically regenerates energy each time the foot is taken off the accelerator, but this comes at the cost of some subtle deceleration.

The Mini E has a similar energy recovery system, but it’s far more jarring. The only real shortcoming with the I Miev is its price. Mitsubishi hasn’t officially confirmed how much it will cost when it goes on sale in the UK, but estimates of up to a £20,000 have been mentioned.

Mitsubishi puts this down to the poor exchange rate for the yen and the fact that it’s such a low-volume vehicle. It will cost about £750 a month to lease, an expensive eco statement, though Mitsubishi says the I Miev costs only 45p per 100 miles to run.

Mitsubishi is looking to sell its entire UK allocation of 200 units quite quickly and has already taken deposits at London dealers.
All it needs now is for the UK’s infrastructure to catch up with what it’s created. Until that happens, sales of electric vehicles will say low, keeping prices high.