Mitsubishi’s history in Europe is interwoven with the Lancer – the car spearheaded its launch into the region in 1974.

Over its 34-year history the Lancer has carved out a name for itself among fans, but in recent years that name has been tied to the high-performance Evo models.

Previous generations of Lancer (and dubiously-named Carisma) have been marred by bland looks, poor quality and a forgettable drive, so have always been some way behind competitors.

But in its latest incarnation, Mitsubishi is aiming to establish the Lancer as a bigger player in the C-segment.

It sees the Mazda3 and Honda Civic as its main rivals, and is aiming for 50% of sales to be conquests.

Visually at least, the new Lancer is streets ahead of older models. It’s a genuine head-turner, and with its aggressive headlights, boot spoiler and big alloy wheels it looks like a toned down version of its performance-focused Evolution X sibling.

Interior quality is also vastly improved and will feel familiar to people used to the Outlander’s chunky switchgear.

At launch, the Lancer is available as a four-door saloon only, though a five-door sportback will follow in September.

Prices will be identical for both, but the entry-level GS1 and GS2 trim variants and 1.5-litre petrol engine will be available only for the hatch.

All four-door models are fitted with 18-inch alloy wheels, a bodykit, tinted windows and uprated suspension.

On the road, the Lancer is a decent drive, but doesn’t offer the excitement to live up to its aggressive looks and well-sorted chassis.

Neither the 1.8-litre petrol or the 2.0-litre diesel offer the performance to make the most of the chassis.

Of the two, the petrol is expected to be the most popular, accounting for 50% of total sales. It’s a quieter unit than the diesel, but a lot less willing.

It’s a better proposition for buyers, too.

The Mitsubishi Service Plan, which covers the first three years of servicing, costs £200 for the Lancer.

Residual values are now better than competitors such as the Mazda3 and Ford Focus, and are only slightly lower than the Honda Civic.

Mitsubishi has made the Lancer a genuine contender.

A step forward in every respect, it’s likely to attract new buyers to the brand without alienating existing customers. 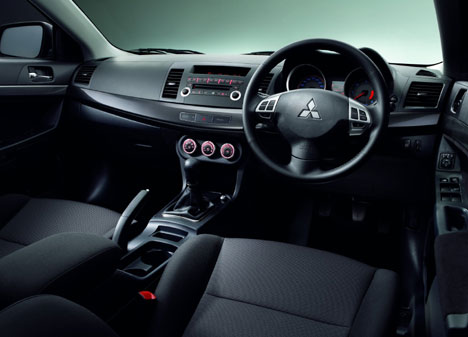