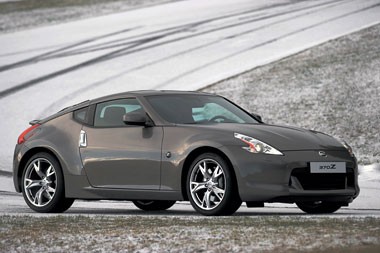 Nissan hopes its new sports car will continue the success of the 350Z.

Although very similar at first glance, the 370Z is new from the ground up and promises a significant step forward.

The V6 engine has been increased in capacity from 3.5-litres to 3.7-litres, and power has improved by 18bhp, while extensive use of lightweight materials has trimmed the car’s weight by 32kg.

The 370Z also has a shorter wheelbase and wider track to make it more nimble and responsive to drive.

Features that will appeal to driving enthusiasts include keyless starter button, a viscous limited slip diff and a synchronised rev control system with manual transmission models (except the entry 370Z), which blips the throttle to smooth up- and down-shifts.

An automatic transmission option will be available on European models for the first time.

It features downshift rev matching to smooth changes and includes paddle shifters for when the driver wants to change gears manually.

Criticisms of its predecessor included lack of practicality and poor perception of interior quality.

Nissan has made progress in addressing these with the 370Z, by improving the fit and finish inside and using materials such as soft touch plastics and leather and suede trims on higher grade GT specifications.

Thanks to the new car’s more rigid bodyshell, the strut brace which dominated the 350Z’s boot has been dropped to provide more luggage space, and a tonneau cover helps reduce engine noise.

Nissan GB said the car is already attracting interest ahead of launch, and is benefiting from the halo effect of the Nissan GT-R, of which deliveries have just begun.

Some buyers will come from current 350Z owners. However, Nissan hopes the 370Z’s pricing will win buyers from German sports cars.

Although the carmaker wouldn’t be drawn on 370Z’s annual sales target during the tough market conditions, it admitted it has ordered 1,200 units from Japan in its initial shipment.

An open-top 370Z Roadster will follow in late summer.

Daily Telegraph -  Though something of a blunt instrument, the 370Z delivers in the context of its key tenet; maximum bang for our bucks.

4Car - Fantastic driving experience, loads of character, a natural successor to the 350Z.

Evo Magazine - The Nissan 370Z is a car for boys who like a lot of bang for buck - even if it is far more refined than its predecessor.