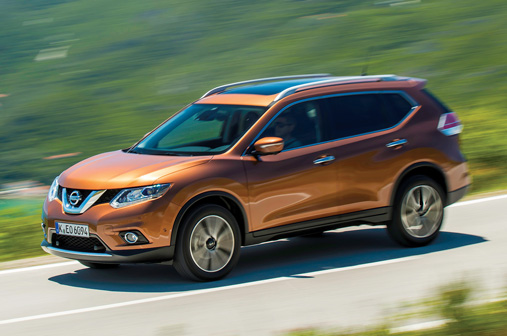 Nissan knows it has significant brand equity in its X-Trail model range. Its two previous generations of the 4x4 have created quite a dedicated following, with some 53,000 still on the road in the UK.

Nevertheless, after the Europe-wide success of crossover models such as its Juke and Qashqai, the Japanese carmaker acknowledges there’s a bigger prize to be won by broadening the X-Trail’s appeal. This has fuelled its desire for the new version to fulfil a dual purpose – serving as its mid-sized SUV with 4x4 capability for those who want it, and offering a family-friendly seven-seater that fills the gap left by the recently discarded Qashqai+2.

Nissan GB expects its first full-year UK sales to be about 8,000 and passing 10,000 units thereafter, more than double the peak of the old model.

The company car user is a prime target – only about 40% of new X-Trail sales will be to private buyers, with fleets, user-choosers and Motability taking the rest. Business leasing deals are already available offering the car for monthly payments below £350 excluding VAT.

'The X-Trail was becoming an increasingly niche car'

Nissan Motor GB managing director Jim Wright said: “We kept the nameplate after a survey showed this model to be among the best recognised of our products, but we had to respond to the fact that the X-Trail was becoming an increasingly niche car.”

Some 40% of SUVs/crossovers sold in the UK now are 2WD. The plan was to retain the model range’s 4x4 heritage and build on Nissan’s crossover expertise to redefine C-segment crossover conventions.

“The decision was taken to develop the concept to have a broader appeal. I like the result and I’m confident it will bring more people into the brand,” said Wright.

The new Nissan X-Trail has abandoned its predecessor’s upright styling and go-anywhere focus and followed the lead of the smaller, road-biased Qashqai. Exterior and interior styling and quality is much improved and there’s more than enough space for adults in the back row thanks to seats mounted on runners. An optional, electric-powered tailgate gives access to a 550-litre boot and, for an extra £700, buyers can specify a third row of fold-out seats, perfectly suited for carrying their children’s friends. All three seat rows are mounted ‘theatre style’ to give better visibility.