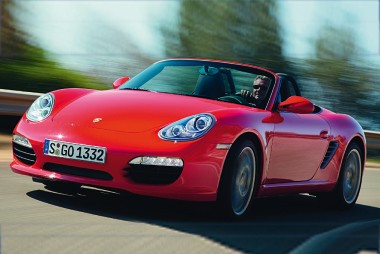 Porsche sees its Boxster and Boxster S models as a buyer’s first stop in a lifetime of loyalty to the premium brand. As the entry-level vehicle, Boxster costs £33,704, rising to £40,388 for Boxster S.

For its class, where rivals include Audi TT, BMW Z4, and Mercedes-Benz SLK, Porsche says Boxster is considered the definitive roadster, stemming from its 1906 roots when the first Porsche two-seater mid-engine car was launched. Other rivals include Nissan 370Z and Honda S2000.

The German carmaker says it’s a class leader in terms of luggage space, with 280 litres front and rear collectively, and has reduced emissions and fuel consumption.

Anyone who puts a deposit down on a Boxster receives a half-day at Porsche’s driving experience centre which can also help with upsell, as buyers can see the options in action.

“It’s a nice introduction to the brand,” says Porsche.

Standard specification isn’t extensive: it includes the expected alloy wheels, ESP and electric windows as well as leather/alcantara seats and front side airbags.

Porsche won’t predict sales figures but 400-500 units have been sold so far this year.

Manual will account for 60% of sales, with the remaining 40% attributed to its automatic PDK (Porsche’s dual-clutch gearbox).