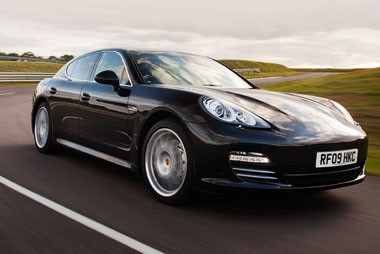 Porsche dealers are getting to grips with selling the first four-door luxury saloon in the brand’s history.

Wayne Darley, Porsche GB manager of brand communications and strategy, said: “We don’t expect Panamera to appeal to the fleet market. However, there is an opportunity with small business entrepreneur-types that might run less than five cars as a company

"Their motivation is often more like a private buyer, with freedom of choice.

“Dealers have talked to them, invited them to launch events and the responses have been very positive.”

Some buyers will be existing 911, Cayman or Boxster customers who need a genuine four-seater.

Darley said the Panamera at last gives dealers an opportunity to keep those customers buying within the brand.

Derivatives offered comprise the S, 4S with four-wheel drive and Turbo, all of which use a modified V8 engine already in the Cayenne.

Next year Porsche will add a V6-powered Panamera with 300bhp for under £60,000. A hybrid is under development.

No decision has been made on whether to offer the diesel powerplant, recently added to Cayenne.

Panamera lives up to Porsche’s heritage.

It has all the brand’s DNA: the long bonnet, raised front wings, sloping rear screen and low stance. It has power: the 400bhp S is rapid, the 500bhp Turbo is brutal.

It also has real comfort and refinement for four adults, can swallow suitcases in its 445-litre boot and will entertain and enthuse the driver with direct handling and extra responsiveness once the ‘sport’ button is pressed.

As Darley says: “It’s the four-door car you would expect Porsche to build.”

There is good news for customers with an environmental conscience.

Panameras with the PDK double-clutch auto transmission get more miles per gallon than the manual thanks to the overdrive seventh gear and are the first Porsches to feature automatic stop-start technology.

Four into one “pure” Porsche will go and it doesn’t have to be a monster SUV.

The way the Panamera defies the forces of physics is wondrous.

As a refined GT, the Panamera is a highly appealing proposition – it’s smooth, refined, luxurious and extremely well-built.