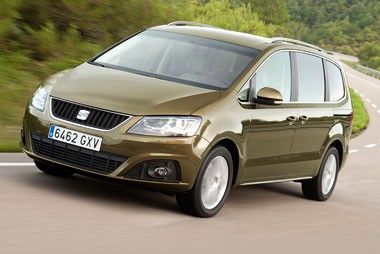 Seat is finally replacing its Alhambra with a new model after 14 years and 33,000 sales in the UK.

The Spanish brand is after 10% of the MPV segment with the new Alhambra which is just under 2% higher than the previous model experienced in its peak in 2004.

The new Alhambra is pretty much identical to its sister-model, the VW Sharan, sharing much of the same equipment and styling, except Seat’s offering will be priced lower and will feature a higher level of standard equipment.

The VW badge holds more prestige with buyers and as a result the Alhambra is likely to have lower residuals.

Seat wouldn’t reveal what added extras the Alhambra would get over the Sharan.

However, hi-tech optional gadgets include a reversing camera – available for the first time on a Seat – and VW’s park assist.

UK buyers will get to choose from three trims, S, SE and SE Lux and three engines – a 2.0-litre TDI in 138bhp and 168bhp power options, as well as an entry level 1.4 TFSI petrol engine.

The best seller will be the lower powered diesel.

All models are available with a six-speed manual gearbox or VW’s twin-clutch six-speed DSG automatic.

Ecomotive technology like stop/start and brake energy regeneration is standard across the range.

Practicality, space and modularity are of high importance in this segment and the seven-seat Alhambra delivers well in those areas.

At 4.85 metres, it is now 22 centimetres longer than its predecessor.

It has also gained an additional nine centimetres in width, taking it to 1.90 metres.

Sliding doors are a standard feature, but electric operation is an optional extra.

The second and third row of seats can be folded flat and Seat made a big deal of being able to operate it all one-handed.

The floor of the luggage compartment always remains completely flat, even with the seats folded.

When the third row seats are folded, the load surface is 1.3 metres long.

Boot space increases to 2,430 litres when the third and second row seats are folded.

Prices haven’t been confirmed but the Alhambra is expected to cost around £21,000.

Seat wouldn’t talk sales figures “in this climate” but fleets are expected to take two-thirds of the pie, with 85% specified as diesel.

Peter Wyhinny, Seat UK managing director, admits the brand doesn’t have a good history with fleets, but has been encouraged by Seat’s recent performance with a 31% increase in corporate sales year-on-year.

The Spanish brand wants to stabilise its market share of 1.7% this year and is looking at the fleet market to help balance things out.

Whyinny said: “It’s not that we’re rejected by fleets, we’re just not even on the choice list in a lot of cases and that’s got to change.”

Dealers are being urged to target local SMEs.