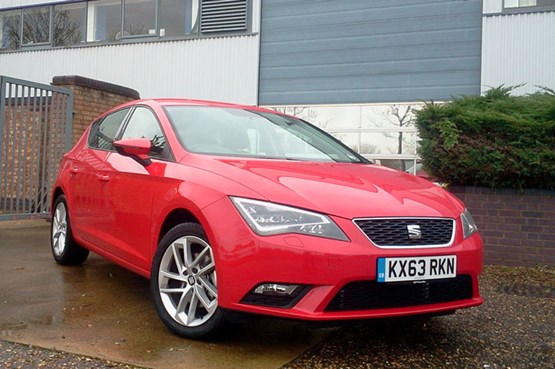 AM’s long-term Seat Leon has been a popular addition to the fleet, with at least two of the editorial team considering it as their next car purchase.

However, there has been a niggle with the Leon’s ownership. The engine appears to be struggling to cool down after a short journey, making a noise which sounds like the extractor fans at the back of a takeaway.

Fans were blasting loudly to the point where I was worried it would wake the neighbours. The engine temperature gauge doesn’t show signs of overheating and it doesn’t happen on every journey, but it’s a slight worry after less than a year of ownership.

A quick look on Seat owner forums and Google doesn’t highlight this as a widespread issue.

I used the problem as a potential test for AM’s local Seat dealer and the process customers need to go through to have their product questions answered digitally by dealerships.

The first port of call was the local dealer. Google search: “Seat Peterborough”. Stoneacre came at the top of the page results. No Live Chat, no clear place to get in contact. I filled out a general enquiry form explaining the issue.

I wanted to speak to someone immediately, but didn’t want to phone, so typed “Seat dealer live chat” into Google. Blade Group was the winner, with Seat sites in Gloucester and Bristol, you could choose to live chat with people at either site. Blades captured my name and email address before I struck up a conversation with Sarah from Blade.

Her first response was to get the car booked in, even though I had asked if any other cars had been having the problem, or if the engine cool-down noise was normal. Data capture was high on the agenda, with Sarah capturing my contact number, email address and post code before asking the service team for their opinion on the problem. I told Sarah that I would prefer to be contacted by email as I was at work.

I completed the Stoneacre contact form at 2.55pm and finished chatting with Sarah at Blades at 3.10pm. I got a response from a Blades technician on the phone one hour later (points for response time, but the dealership ignored my preferred method of communication). He told me the problem was potentially caused by the diesel particulate filter

regeneration on the Leon and he had noticed the noise on other Leons too. He then advised me to take the car into my local Seat dealer if I was concerned. I never heard back from the local Seat dealer.

The exercise goes to show how easy it is for customers to use online chat and that some dealers will still help you with a product question, even if they know you’re too far away for servicing work.