Audi will next year remove this faintly ludicrous disguise and reveal to the world its new A7.

It doesn’t take a genius to work out that this newcomer will slot between the A6 executive car and A8 limo in Audi’s burgeoning range, as Ingolstadt prepares to fill every nich.

Buy an A6 if you want a roomy company car – Audi’s secret new A7 will be a swoopier, more coupé-like exec in the spirit of the Merc CLS (itself based on the infinitely more sensible E-class).

It will put dashing style over practicality, for businessmen keen to stand out from the conventional crowd of three-box saloons.

This comically heavy disguise hides a four-door bodyshell, wrapped around the oily bits of the next- generation A6.

It will use aluminium to trim flab, usefully improving economy and emissions and making the car more nimble through corners.

Four-cylinder engines will be off limits, so the new A7 will be powered by a suite of predominantly six- and eight-cylinder units.

Most buyers in this sector plump for diesel, however, and Audi will offer 2.7-litre and 3.0-litre TDI models.

Naturally, you’ll be able to pick between front and Quattro four-wheel drive, plus a choice of manual, automatic, CVT and twin-clutch transmissions.

Whoever said too much choice was a bad thing? 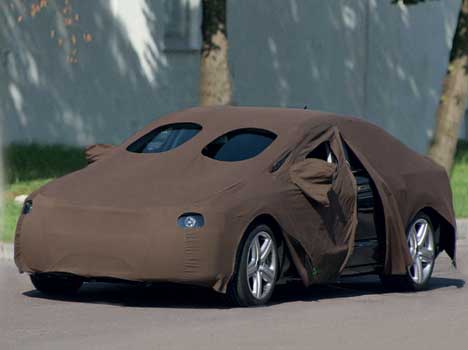