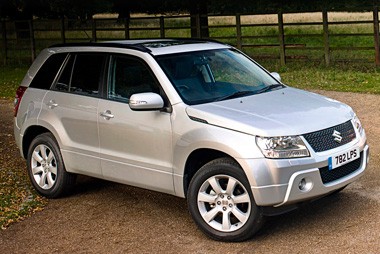 Against the back-ground of a credit squeeze and increased demand for lower-cost motoring, Suzuki’s move to replace its two-litre petrol engine with a bigger and thirstier unit could well look like a recipe for disaster.

But the revitalised car-maker claims the reverse is the case as 2.4-litre examples of the Grand Vitara begin reaching the showrooms – and with good reason.

Not only does the additional 400cc provide much-needed extra power, it also turns the top-of-the-range model into more refined SUV transport.

Thanks to increased torque, the car shows a more spirited response through the gears. Add marginally better CO2 emissions into the equation and the loss of around 1mpg in combined economy seems a fair trade.

A combination of body panel reshaping, more efficient sound insulation and the adoption of thicker glass for the door windows gives the Vitara a quieter demeanour at all speeds.

Overall, the measures cut noise by two decibels, but the benefit is particularly noticeable during main road cruising.

Harder to spot are detail bodywork revisions, but a new grille and door mirrors with integrated indicator repeaters do help raise the image of a model that has been regarded as worthy but lacklustre.

On the five-door version, leather trim with heated front seats and a power-operated glass sunroof are included, as are high intensity discharge headlamps – a unique feature in the segment.

Safety also gets an upgrade, with electronic stability gadgetry now fitted as standard with the new engine, along with ventilated rear disc brakes and extra shock-absorbing elements around the bonnet, wings and front bumper for increased pedestrian protection.