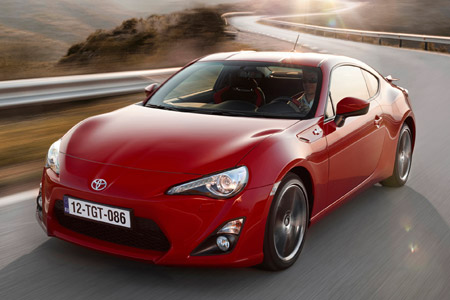 Toyota is back in sports territory again with its GT86 after six years of solid focus on family vehicles.

UK dealers have been after a halo model to spice the brand up for many years and a partnership with Subaru, along with a new sports focus at the top in Japan, has finally delivered the GT86, a project first started in 2007.

Toyota wants the GT86 to help shift perceptions of the brand and get people excited about driving
its cars again. The new company slogan after all is “fun to drive, again”.

This coupé has been developed with the car enthusiast in mind and as a result is quite a rare beast in this day and age of modern cars which tend to feel like being cocooned in a box of complicated electronic systems.

Of course, the systems are all there, but the Japanese engineers have really succeeded in creating something that is instantly engaging to drive and massive fun.

The GT86 can’t compete with supercar performance from its naturally aspirated 197bhp 2.0-litre Boxer engine, but what it nails so well is making the driver feel like they’re at the limit on public roads without having to hold back.

It’s addictive in fact, particularly when faced with twisty B-roads and the GT86 eats up sharp cornering
with ease.

The six-speed manual will be the biggest seller, but there is a paddle shift automatic available for an additional £1,500.

The engine note is pumped into the cabin to ramp up the feeling of handling more power than perhaps there actually is on offer, but Toyota has managed it without making it sound too synthetic.

Options include Toyota’s Touch and Go satellite navigation and leather and Alcantara upholstery.

Toyota is also launching an approved range of bodywork, brake and suspension modifications to enthusiasts looking to tweak things further without invalidating their warranty.

The 2+2 cabin has a cockpit designed around the driver and the front sports seats, aluminium pedals and contrasting red stitching around the black leather trimmed steering wheel all fit with the GT86’s sporty personality.

There are two bucket seats in the back, but it’s pretty much impossible to fit a grown adult without digging knees into the driver or passenger’s back, although this is a common problem on all 2+2s.

The GT86 doesn’t have brilliant running costs either, with a manufacturer quoted 36.2mpg figure thrown out the window as soon as the rev limiter starts flying.

Jon Williams, Toyota GB managing director, wants sales executives to “gush” to prospective customers and is taking them all on track days to get acquainted with the car.

Dealers’ performance on the track is even being filmed so they can share the experience with friends back at work.

Toyota expects to sell 4,000 GT86s a year, but it will be interesting to see how things take off beyond just the core demographic of male driving enthusiasts, which it should do considering how brilliant it is.