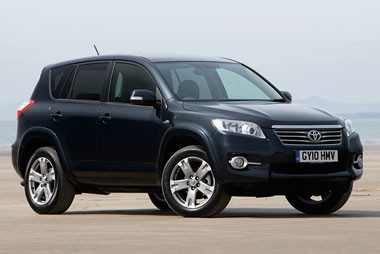 An evolution of the third-generation model launched in 2006, the latest Rav4 has a cleaner and perhaps less rugged looking front end.

And the revision arrived at about the same time as Toyota’s upgraded five years/100,000 miles warranty.

The diesel Rav4 comes with a 148bhp engine and produces a hefty 251lb-ft of torque, so will spring from 0-62mph in a tad over 10 seconds.

Light steering and comfortable controls combined with an easy gearchange make driving the Rav4 less of an adventure than its jacked up appearance might suggest.

While the Rav4 with four-wheel drive will feel more sure-footed than other compact cars, it has evolved over the years to retain the road-manners of a conventional car.

Under normal conditions it sends all drive to the front wheels, but when conditions become challenging, up to 45% of torque goes to the rear wheels.

Inside there is enough room for five adults.

Although the engine performs well enough, it isn’t the quietest diesel on the market.

However, once on the move, the Rav4 feels refined with low levels of noise intrusion.

As the Rav4 does not use stop/start technology, Toyota still has some room to improve the car further.