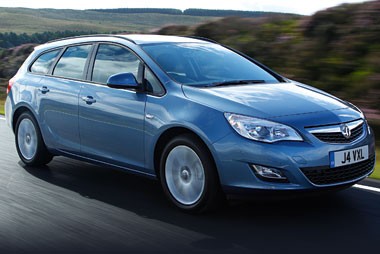 A total of 38,220 new five-door Astra hatches have found UK homes since the model launched in December 2009.

Vauxhall is expecting the Sports Tourer to take 12% of all Astra sales which is 7,000 units.

However, it said there was potential to build even further on that target.

The Sports Tourer will be assembled solely at Vauxhall’s Ellesmere Port plant in Cheshire, while its new upper-body structure has been engineered at the Vauxhall Engineering Centre in Bedfordshire.

Vauxhall will push this British association hard in its marketing and hopes it will bring in additional customers with a patriotic streak.

The Sports Tourer maintains the hatch’s wheelbase (2,685mm), but due to how the new model has been packaged, load length has been increased 28mm to 1835mm, and its load volume by 30 litres to 500 litres with the rear seats up.

An increase in space over the hatch is a given, but Vauxhall has also added its FlexFold feature allowing each section of the 60:40 split-fold rear seatbacks to be lowered at the press of a button housed in the walls of the cargo compartment.

It just takes a tap with a finger to slide the cover up and out of the way to load or remove items.

Compared with the current Astra estate, the Sports Tourer has an additional 25 litres of storage space in the cabin too, 50% more than before.

For families or corporate users that need a bit of extra load capacity the Astra Sports Tourer is a practical option.

It’s not bad looking either, for an estate, with quite a sleek body line.

Customers can choose from seven different engine variants for this new model and it’s a bit hit and miss depending on which one they go for.

The best option AM drove was the 1.4-litre turbo petrol which kicks out 138bhp.

The diesel options, which are likely to be the best sellers, are lacking in refinement in comparison to Ford and Volkswagen’s oil burners.