Is Audi City the dealership of the future?

No one is suggesting that all dealerships will look like this in the future but when you have a 46 car model range like Audi, having a huge showroom in high cost city centre areas just does not make sense financially.

The site is jointly operated by Audi and dealer group Sytner.

Customers using Audi City will have an assigned customer relationship manager who will be a consistent point of contact from first consultation to aftersales and ongoing services.

These relationship managers work for Audi and then Sytner provides a team of five sales experts that also work on site.

The team at Audi City would not disclose sales figures, but it was one of the top five performing centres in the UK for sales in August 2012. Audi City has seen a 58% rise in car sales versus the more conventional Audi retail space which originally stood in its place, of which 94% have been new customers. The dealership has been pulling in over 1,000 visitors each week.

The first floor of the dealership features a wall of digital screens surrounding the interior space with touch screens allowing customers to spec their perfect car.

Audi’s entire range of cars, engines and options are available to view. The process can be controlled by the customer via a camera which tracks your movements on the large interactive screens or on the tablet style plinths. My instant reaction was that this system would be off-putting for older customers or too gimmicky for some, but the customer relationship manager can control the system for you.

Choose an R8 and it revs and races off into the distance before turning and accelerating towards you. The scale model can be viewed from any angle.

I wasn't expecting there to be any cars on site, but there where three on display. These models are rotated on a regular basis.

The larger screens surrounding the interior walls of the dealership can be controlled via iPad by customer relationship managers and their tablets can be used to print out brochures or email across documents to customers.

None of the customer relationship managers come from an automotive background. One was working at Travelex before taking on the job at Audi City and another was at an Apple retail store and another used to work at John Lewis. All were chosen purely for their approach to customer service and product knowledge.

The onus is not on selling, but letting customers experience the brand. There were three customers in the showroom at AM’s visit. One was revving a real R8 Spyder to redline and another was configuring a virtual model on one of the screens. A steady flow of retail customers were rushing past on Picadilly. People taking pictures outside were encouraged to come in to take a closer look. 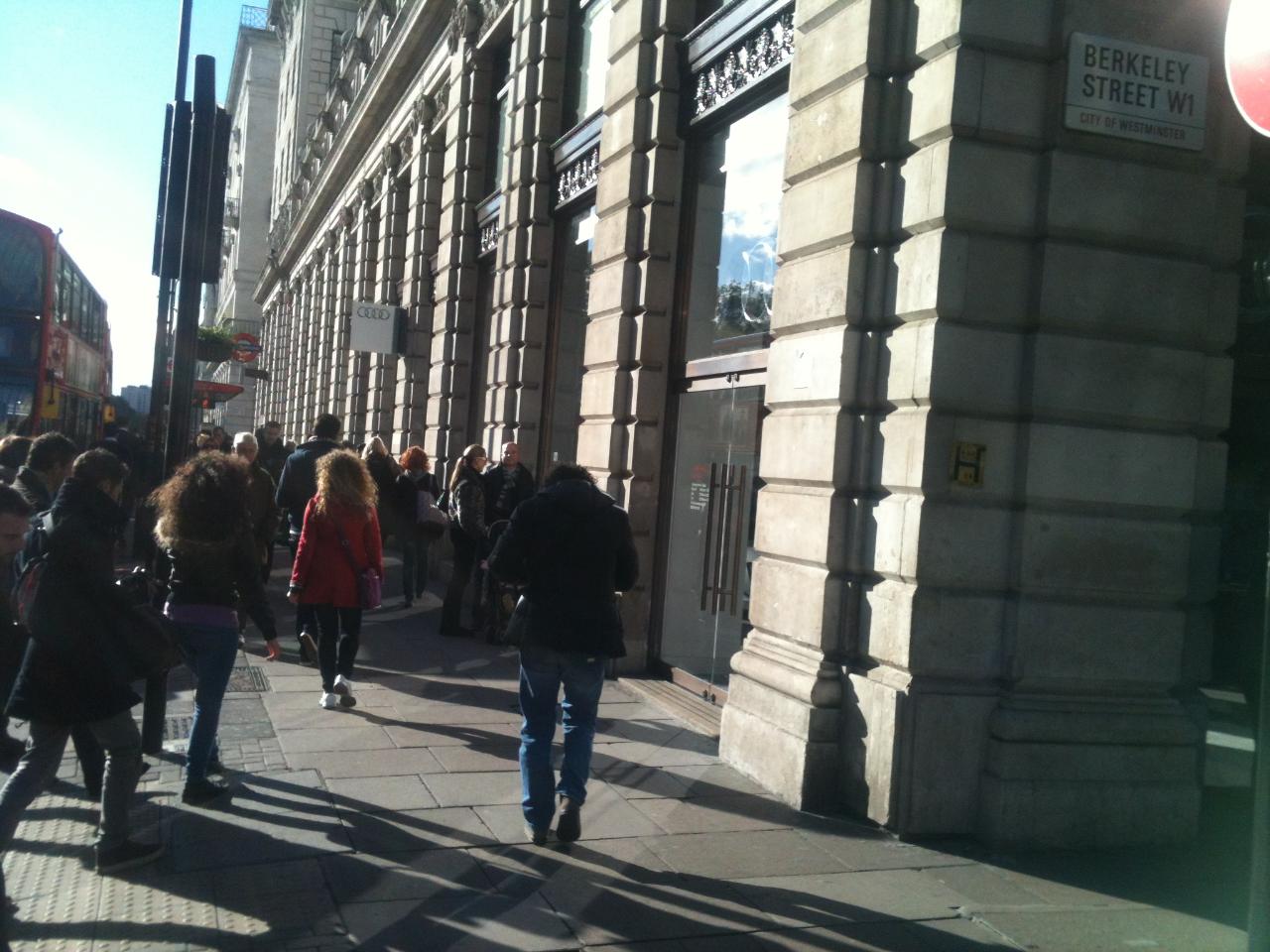 If customers are interested in buying they are accompanied by their customer relationship manager down to the second level of the showroom.

Here, the Sytner team take the customer through the sales process in private glass clad rooms. There is a large table with embedded touch screen which customers can use to interact with their car. Paint options and leather swatches are hanging on the walls and can by placed on the interactive table to change the colour/leather option projected on the screen.

The business does take in part exchanges, but due to its location in central London, these have to be assessed away from the showroom. The Sytner team accept evaluations with a video camera and believe they can return to customers with a figure within an hour after receiving footage of a customer's part-ex.

Used cars are dealt with at Audi City London and its service and aftersales functions are based at its nearby sister centre, Victoria Audi.

All leads with customers based outside of London are passed on to the closest Audi showroom to the customer’s post code.

So is it just a gimmick? Of course there are novel elements to the process and Audi is not suggesting that every dealership will feature every element, but certain aspects will make it into dealerships across the UK.

Audi UK’s managing director Martin Sander wants the video walls in showrooms to replace the brochure aspect of the retail experience and this should reduce the pressure on dealers to display as many new physical models.

Audi and Sytner would not disclose what sort of investment was required to make the digital showroom, but the amount of screens and specialist digital equipment would mean it would surely be substantial.

Tablets and touchscreens are increasingly becoming a very familiar way for customers to interact with technology so these elements will surely make their way into all future showrooms. Despite the surroundings and the way you interact with the product, the actual sales process itself was not far removed from a traditional showroom. So it's not a revolutionary change, but the tools used make sense to a smartphone generation of customers.

It's not clear whether the sales team are working to a standard commission pay structure or have higher basic salaries. Either way, it seemed to be a very low pressure environment when I visited.

The next Audi City site will be in Beijing.

AM will be publishing its UK Franchise Dealer Market Report 2013 on December 10 and features a segment on the future of automotive retail.