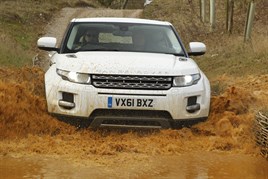 I went to Gaydon for a road test of the two-wheel drive (2WD) version of the Range Rover Evoque yesterday.

We’ve driven the four-wheel drive Evoque on AM before, but this was my first opportunity to drive what was AM’s New Car of the Year 2012.

Particular highlights during the road route included a really smooth gear shift on the manual six-speed and a high level of comfort sitting behind the wheel.

Perhaps the most surprising part of the road test was the fact we were able to take the Evoque on the Land Rover Experience off road track at Gaydon.

Much like the 2WD Freelander, the 2WD version of the Evoque was capable of climbing up steep inclines without losing traction (if you managed to get enough momentum before attempting a climb). Some of the stuff we managed to get over, I would never have thought a 2WD car would be capable of.

It shows that this new model still has elements of that Land Rover DNA flowing through its veins, despite the fact the Evoque is one of the brand’s most urban models.