Would wireless charging make a difference to electric vehicle adoption? 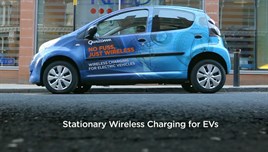 The automotive retail industry is pretty cynical about pure electric vehicle sales. While dealers are aware the EV market is in its infancy, volumes need to significantly increase before businesses take real notice.

If EV range can be increased above 200 miles, if the charging time can be reduced, if the charging infrastructure is in place, then maybe EVs can work in urban environments. That's a lot of caveats.

While customers might not be taking up EVs in their droves at the moment, the problem of increasing global car sales and the pollution that comes with that is further highlighted by a video piece on the BBC today as part of its What If? Series. What if everyone owned a car?

In the guest opinion piece below Dr Anthony Thomson from Qualcomm talks about the introduction of wireless charging technology for cars and how he believes there will be an eventual tipping point for EV sales:

Our lives are becoming less and less about wires and cables and more about wireless: from mobile phones, to the wireless internet and now with wireless power. Low power wireless charging of consumer electronics, including mobile phones and laptops, has been around for many years, transferring a few watts of power over an air gap of a few millimetres.

Wireless power is about to take a huge leap in scale, as kilowatts can now be transferred over an air gap of hundreds of millimeters without the previous losses through poor energy transfer efficiency.

One of the key dynamics driving the electric vehicle (EV) market is continued urbanisation of the world’s populations (70% of the world’s population will live in cities by 2050). With increased urban development comes increased transport congestion and associated decreased air quality, both of which are driving governments to act quickly to find remedies. Pike Research forecasts that the smart city technology market will grow to $20.2 billion in 2020.

Mass global urbanisation, coupled with increasingly high levels of pollution will, if unchecked, lead to decreased air quality in our cities, poor health of our urban populations, along with burgeoning and unsustainable health costs for government.

According to the World Health Organisation, urban air pollution, largely caused by motor vehicles, kills around 1.2 million people each year around the world, which subsequently puts an increased burden on healthcare costs.

In addition, European cities face fines of up to €10m for failing to meet mandatory air pollution targets. Meanwhile, pressure to comply with carbon emission targets remains a constant pressure for local and central governments and automotive manufacturers alike.

Now more than ever, it’s crucial we support EV sales towards their inevitable tipping point, allowing automotive Original Equipment Manufacturers (OEMs) to quickly realise the goal of clean transport; reduce air pollution and CO2 emissions in our cities and transition to an healthy alternative to internal combustion engine cars.

At the core of clean urban mobility, is a need to recharge EV batteries simply and conveniently, without the need for plug-in cables and associated street furniture. Simplicity and minimum driver intervention are key features that win out time-and-time again in novel technology adoption and when these features are coupled with high power transfer efficiency, wireless charging offers an elegant and effortless solution.