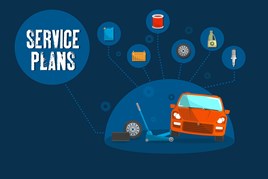 Service plans are a key tool in the quest for greater customer retention. But if the product is supplied by the car manufacturer and is packaged into the vehicle sale, is that a good or bad thing for the franchised dealer? Does it actually encourage a customer to come back to that particular site for aftersales and, perhaps ultimately, another vehicle, or it is just promoting the manufacturer’s brand?

Serkan Obuz, head of corporate sales at The Warranty Group, believes service plans are a good way to encourage people to return but warns: “One of the downsides with a manufacturer plan is that it doesn’t always bring benefit to the dealer. If they have their own plan, they are more likely to retain customers into their own business.”

More and more manufacturers now have their own products and are seeing them prove successful. In 2013, Honda launched a five-year plan. It is priced £555 from August 1. More than 80% of its new car retail customers tick the box, and with the option to factor the cost into a PCP – for example, on a Civic 1.8 SE Plus it’s just £15 pcm – it’s not hard to see why.

Honda says the benefit for the customer is peace of mind, improved residual value and, with aftersales savings of up to £875, reduced cost of ownership. It says for the dealer there is improved profitability on service and parts, plus reduced refurbishment costs if they get the vehicle back to remarket.

Many manufacturers report similarly high levels of take-up on their service plans, and not being able to include it into the PCP doesn’t harm the appeal. Volvo has three and five-year packages, which have to be paid for up-front and in full, yet the sign-up rate is currently 90% – even higher than Honda’s.

The Warranty Group administers service plans for a number of manufacturers, dealer groups and independent used car retailers. Its service plan business has almost doubled in volume over three years, and it now looks after more than seven million policies for around 500 UK dealers.

Obuz said just a few years ago the average service plan penetration was about one in five or six. “Now it’s one in three or four, depending on how good the offer is. For example, Vertu has a substantially higher rate because it prices it very competitively and has a strong outbound contact centre.”

He believes dealers are now recognising the benefits and because of that are pushing it harder to customers.

“More and more are penalising staff for not selling plans and rewarding them greater when they do,” he explained.

Service plan provider eDynamix has around 100,000 policies in the UK, plus more in the Irish market, mainland Europe and, in a recent development, Australia. Director Iain Nickalls said plans are a good thing to encourage loyalty, but not so great for recovery rates as they are normally sold at national fleet labour rates.

He says he knows dealers who are reluctant to push manufacturer plans. “They are often a capital cost with up-front payments, which can be substitutional to other products offered as part of the sale, such as GAP, a warranty or accessories. The majority of salespeople find it easier to discuss and sell service plans after the sale of the vehicle – usually at handover – at which point the manufacturer plan can’t be sold as it has to be included in the invoice.”

Suppliers of dealer service plans are working hard to make their products more convenient and attractive, in response to the big push from manufacturers of their own service plans. However, the waters are muddied because some suppliers also administer the service plans for manufacturers – for example, The Warranty Group works with Kia – in addition to offering separate products direct to dealers.

Nickalls said eDynamix had instigated many new developments, including an online calculator that is a plug-in for the dealer website. It allows the customer to configure a service plan and get an indicative price before they buy the vehicle.

Any plan subsequently taken can also be fully integrated with the dealer’s DMS, so it will send a reminder to the customer that their service is due, populate the booking system with relevant information and allow the customer to build in other items, such as a request for new tyres.

“Automated renewal is another new development,” said Nickalls. “When a plan is coming to an end we will create an extension that renews it for 12 or 24 months, potentially keeping it at the same price for the customer – as a reward for their loyalty – even if the service price has gone up.”

Integration with third party suppliers, such as a roadside assistance provider or a company like XSPaid, is also helping to build value and choice for the customer.

For the dealer, Nickalls said it offers convenience and ease of use, but mainly a greater return. “Without exception, the dealer will sell more plans at a higher value than they have done previously. It also leads to better customer service and trust, and makes it easier to sell additional red work on the day. The result is improved loyalty and a greater propensity for the customer to return and repurchase a new vehicle from the selling dealer.”

Dealers can also achieve up to 100% of their advertised recovery rate as the policies are sold using retail labour rates and oil prices.

The ability to meet the needs of individual customers is another area where manufacturer plans can lack flexibility. For example, high-mileage customers might need some form of compound plan where they can build in additional servicing.

Angela Barrow, managing director at service plan provider Emac, said the company operated a programme of continuous improvement to try to enhance the scope and flexibility of its offer. That can include items such as an MoT after three years or extra ‘no servicing’ maintenance items.

She said having a service plan does not necessarily mean it will be successful and dealer support was a key element to ensure that. “Our field-based team is on hand in the showroom to help with training, planning and pricing, and our customer service team helps to lighten the load. Dealers should recognise that the ‘service’ in service plans is all-important.”

“As regulation of areas such as F&I and digitisation has dealers adjusting their operating model, service plans are a perfect customer-centric product. Dealers should be striving to increase penetration in new and notably used car sales.”

The way service plans are being sold is also evolving. For example, eDynamix has partnered with a company which calls customers who have bought a car, new or used, but didn’t take out a service plan. In other cases, a dealer will call a customer just ahead of the first service and explain the benefits and potential savings, in the hope of getting them to sign up.

Some dealers have adopted a multi-level service plan offering in response to initial customer confusion about what was included and what wasn’t. Often arguments would centre on consumables such as filters or brake pads. Now different options, with different price points and more comprehensive explanations, are helping to solve the issue, create more transparency and improve customer satisfaction.

Angela Barrow agrees things are changing, adding: “Service plans are best sold at the point of sale for both new and used vehicles, rather than the service desk. However, we can see real scope for dealers in creating an online self-serve plan proposition.”