The need for speed in vehicle preparation 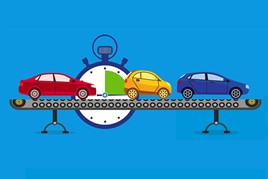 Time is very much of the essence in the used car sector as record wholesale stock prices and the heightened competition of online retail applies plenty of unwelcome pressure on dealer margins.

The chairman of the Vehicle Remarketing Association (VRA), Glenn Sturley, recently said the price of stock had risen to such an extent that many retailers were now wholly reliant on F&I sales to achieve a profit margin.

The situation has also sparked a race to buy vehicles of lesser condition that might not previously have been considered, he said, stating: “The compromise they are making is to buy vehicles in poorer condition and then invest in making them suitable for their forecourts.”

Pressures on stocking are placing additional pressures on vehicle preparation and, with ever increasing efficiency proving the main driver for improved margins through faster stock turn, not a moment can be spared.

Simon Allan, group used car manager at Cambria Automobiles, said: “At Cambria, we say there really isn’t any profit in a used car after 28 days. The pressure is on from the moment stock is bought and an efficient pre-delivery inspection (PDI) process is vital.”

Allan said Cambria targets a 72-hour turnaround for cars, from purchase to being ready for sale or test drive.

As activities such as vehicle imagery, video and writing accurate descriptions became increasingly important in the preparation process, Cambria took the decision to employ web specialists at each dealership to help drive the pace of that process and the PDI operation.

Allan said: “They give a dealership manager a report, which details any cars that have been in stock for three days but have yet to be checked or prepared, to help drive the pace of that turnaround.”

The need for speed is central to TrustFord’s ‘Now’ initiative, which promises customers will be able to drive a new or used vehicle home on the same day, and within one hour of purchase.

Stuart Foulds, the chairman and chief executive of TrustFord, said: “We are trying to get our preparation process down to 24 hours, because it really is all about immediacy.”

Foulds said four images of a used car are taken within four hours of its purchase to allow the vehicle to be marketed online, with 20 images and a 360-degree video taken once preparation is complete.

Foulds said it is important that used vehicles are prepared at the dealership: “I just don’t buy the suggestion that it’s more efficient to have a centralised PDI factory. Every movement of a vehicle costs time and money, so it’s better to get them to the retail location as quickly as possible.”

Allan agreed, but said that a reliance on remarketing companies’ over-stretched logistics operations could also cause issues. He said such issues recently left Cambria with cars stranded at an auction site. “In the end, we just cancelled the order,” he added.

He added: “At the moment we are even going into schools and colleges to see if we can help tailor the apprenticeships to feed into these positions.”

Cambria established its own SMART repair business, Peterborough-based Ramp, in August 2017, and this is now helping to meet some of its vehicle preparation demands.

Despite some people laying the responsibility for higher stock prices and the need to turn stock ever faster at the feet of independent used car supermarkets, they are not exempt from having to keep up.

Matt Kay, the managing director of Cartime, said he has invested heavily to speed up and improve the quality of his vehicle preparation.

Cartime has invested about £20,000 in the purchase of one ‘smart pod’ – complete with a paint oven – for Cartime’s off-site vehicle preparation area as Kay looks to tap in to lower-grade stock and build in margin with in-house SMART repair, wheel and paint facilities.

He said he would bring two further pods to the site in January, increasing capacity to 80 or 90 vehicles a week.

Kay, who has also appointed a full-time “detailer” to inspect cars, said: “For a part-exchange, professional preparation on-site can mean a difference in margin of £1,000.”

Philip Nothard, Cox Automotive’s customer insight and strategy director, said cosmetic factors are the key to getting a vehicle ‘retail-ready’.

“In the wholesale market, investing in the refurbishment needed to move a vehicle up by one grade improves the margin by an average £470, according to data from Manheim Auctions,” said Nothard.

“Similarly, taking a vehicle from a Grade 3 to a Grade 1 reduces days to sell by an average of six.

“In a retail environment, assessing the need for wheel refurbishment and SMART repairs, and arranging these promptly can make a big difference when it comes to days in stock.”

Cartime is expanding in Bury, transforming the former Farnell Land Rover site  nearby into a specialist 4x4 centre. It is also preparing to open a second premium used car site in Rochdale.

Kay said the biggest issue with expansion was preparation capacity.

“You can easily end up with over-age issues with cars that haven’t even been prepped in the first 30 days,” he said.

Cartime is working to reduce its average vehicle prep time to two days, having already cut it from seven to 4.4 days in 12 months.

Highlighting the need for immediacy in used car preparation and sales, Kay said even the short walk to collect a car from its remote PDI facility was enough to put some customers off a purchase, adding that the immediate retailing of a vehicle online meant customers expected immediate availability.

He added: “Speed of delivery is central to stock turn.”

Kay disagreed with Foulds’ suggestion that Cap vehicle data could be wholly relied upon when uploading a vehicle’s information to the internet.

He employs two specialists to check specifications directly with manufacturers.

“Missing off a key detail in a vehicle description could be the difference between turning a vehicle in one or 90 days. Online car buyers research with a very specific shopping list,” he said.

With his added capacity, Kay is also working harder to prepare even part-exchange vehicles for remarketing, to maximise margins by increasing their valuation and sale value at auction.

As retailers work to tackle staffing and capacity issues in their vehicle preparation operations, third parties are upping their game to meet their needs.

Fix Auto’s network of bodyshop repairers is supporting more franchised retailers than ever and Autoclenz has followed its shift out of its core valeting business of valeting into mobile alloy wheel refurbishment with the opening of a specialist facility in Crewe.

The diversification is building on Autoclenz’s existing SMART repair operation, which Martin Peters, its sales director, described as “mainly the implant of a body shop mobile facility that stays in a dealership and can take care of their SMART repairs”.

Peters said: “The dealer can turn around a stock vehicle available for sale quicker and can make revenue to offset their cost. And we take all the stress out of it.”

Whether retailers drive recruitment and a broader set of skills in their workshops in pursuit of their own preparation operation or employ outside contractors, there appears to be no letting up in the demand for used car stock and, in turn, preparation services, for franchised car retailers and car supermarkets alike.