Why Hodgson Newcastle will never be ‘a carmaker’s puppet’

Was this article useful?
10 people found this useful
12 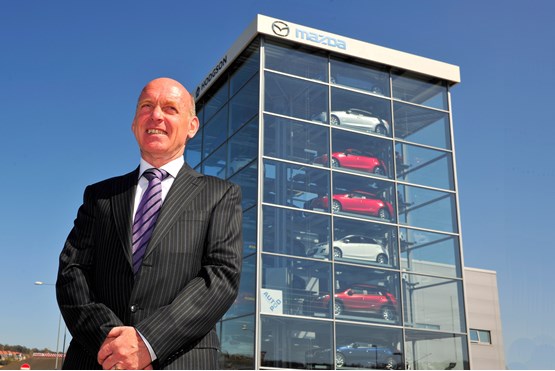 Hodgson Newcastle will never be a manufacturer’s puppet. That’s the clear impression managing director Steve Hodgson gives when he talks about the strengths of his business and the actions of some manufacturers to weaken the franchised dealer’s business model.

The dealer group, with Toyota, Mazda and Suzuki franchises in Newcastle and Gateshead, has been built through decades of organic growth, hard work and integrity and Hodgson is loath to throw all that away. The fact Hodgson is a top quartile performer for all its brands also allows the dealer group a little negotiating power. However, he has no ambitions to head an empire; he wants the best from what he has.

'There are dealers who’ve bought a bunch of dealerships in 18 or 24 months and now haven’t got a pot to pee in.'

“Some of these dealers can’t be making more than 1.5% return, so how does that stand up? So the only way they can do it is through the manufacturer finance house’s money. Once you’re in with that, you’re just a puppet.

“That’s the reason we’ve made money, because of the gearing and the way the company is set up. It’s always been about organic growth.”

When Hodgson Newcastle gained its first Mazda dealership 28 years ago, he turned down a stocking loan and instead started with eight used cars, recycling the profits to buy 10 more, then 12. He said even now he isn’t taking a fortune out of the business for his own lifestyle, and every penny is reinvested into the business to keep it strong.

The company doesn’t even have an overdraft. In hectic plate-change months, it manages cashflow and used car stock levels through careful planning, such as processing the deals that have no or an unwanted part-exchange in the first week, the deals with trade-ins that someone is already interested in during the second week, and then a batch of higher value cars that will go into stock.

The company has taken on funding from manufacturer finance houses when it wanted to acquire or build new premises, but expansion has been done in a measured, calculated way. Hodgson stipulates that any loans must be repaid within three years. In one instance, he refused a deal because he couldn’t see how he could pay back the borrowings in that timescale.

“We’re in a position now where if I wanted to expand I could do so tomorrow. But you have to do it the right way, and for the right reasons. You’ve got to make sure you continue with your core business and that you don’t lose what you stand for and don’t put yourself in a position where you’re no longer in control of your business.”

Hodgson had a foray with Mitsubishi from 2011, but terminated the franchise in 2014 because of a breakdown in the relationship.

Hodgson held an open night for its Mitsubishi customers to inform them it was dropping the franchise. At the meeting it explained that to ensure their Hodgson experience continued, the company was willing to collect the customers’ cars and take them across to the new incumbent for servicing when due, while loaning them another car.

Hodgson places a lot of emphasis on ensuring its dealerships get their “unfair share” of their market. Steve Hodgson believes dealers won’t succeed if their businesses simply reflect their manufacturer’s national market share, so his dealerships have to work hard at winning little chunks of business from their local rivals with Honda, Volkswagen, Ford, Nissan and Hyundai.

In his favour, Hodgson Newcastle has a strong reputation locally and a large, loyal customer base. He has sheaves of customer feedback forms rating the experience as five out of five, and his sales teams are expected to provide a top-notch, friendly experience, whether the customer is buying a five-year-old Mazda2 or a factory-fresh Toyota Rav4. The business has a rolling customer satisfaction score of 94%. Everyone from the valeter and showroom host to the sales team and IT staff has branded clothing and every prospect gets an unaccompanied test drive so they can get comfortable with the car.

“Every customer is buying a Hodgson car and every car is new in the eyes of the buyer,” he said. “Our relationship with our customers is personal.”

It is these personal relationships he tries to protect when manufacturers are pushing for finance renewals. While contacting customers well ahead of their end-of-finance term has become common practice in the industry to hit volume targets, at Hodgson Newcastle there are occasionally circumstances where the company draws the line.

Hodgson talks of customers who have downsized cars because their marriage ended or they have had business issues and he won’t risk them being approached to change their car when he can be confident they will come in once they have found their feet.

The company, which Hodgson has headed since 1986, when his father, its founder, retired following a severe heart attack, has some customers who have been loyal for 30 years. This gives him confidence they will buy again when they are ready.

He takes a similarly personal approach to his staff, with honour and integrity in mind. Hodgson’s office door is always open and he expects his managerial team to be just as approachable. On about a dozen occasions where a staff member has had some sort of crisis in their personal life, be it a bereavement, divorce or other issue, he has provided a loan or support to get them through it.

“What I’ve tried to get across to people is, if you put that pound sign there I don’t care if it’s £1 or £100,000, it’s the principle of the business. And the company ethos is if you show your commitment to us then it’s repaid tenfold. Company appreciation of what we’re about is why people have been here so long.”

Hodgson believes no dealership manager should ever forget their humble beginnings, and should not ask staff to do something they haven’t done, or wouldn’t do, themselves. At Christmas, he was sponsored to work while wearing a jumper with reindeer and jingling bells on it in support of the Percy Hedley Foundation, a local charity helping disabled children and adults. He also provides cars for the charity every year as auction prizes.

“The thing that annoys me about the industry is that it has got to the point where the characters in the industry are very few and far between and the manufacturers are so remote and so mechanical and every one of them comes out with the same old story.”

He sees little value in unachievable national KPIs and composites that don’t reflect the reality of trading in the North-East of England, particularly in a market that can change so drastically in the space of three to five years.

Hodgson said any moron could make money from a Land Rover franchise in the South-East, but to get a decent return from Toyota at the other end of the country takes real hard work.

He believes manufacturers have realised they can control their dealers more closely by reducing the numbers of franchise partners, which has led to the network restructuring of recent years by the likes of Jaguar Land Rover. Many manufacturers have also weakened the role of dealer councils. Hodgson has served on these in the past, and his experience is that manufacturers aren’t keen to listen to the truth.

“They (manufacturers) don’t want individuals, they don’t want characters. They just want robots, and I’ll never be that. Our slogan is ‘Hodgson’s is as individual as you are’ and it’s been that way since the year dot.”

“The reason we’ve got the business we have, and why we’re still here with people who’ve worked here 20 or 30 years, is because we have integrity and we’re honourable. That’s more unique now than it has ever been. There have been some great businesses over the years, but they are few and far between now.

“This job is tough now and that’s because of the complicated structures behind the trading terms and the standards demands and quarterly audits. It’s made more tough by the fact that you end up having fights, not conversations, just to get a commonsensical thing changed or passed.”

Theatre in the tower 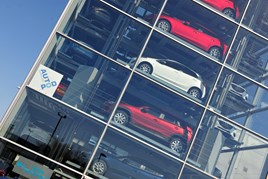 Hodgson’s Gateshead Mazda site has been home to the UK’s only Autopod car tower since the end of 2010. It is a fully automated 32-car storage and display facility, connected to the showroom.

It provides an element of theatre as staff can order a robotised platform to rise and collect a car from high in the eight-level tower, before bringing it down to reveal before the customer.

Autopod was set up in 2008 as a joint venture between Steve Hodgson and Whelan Construction and allows dealer staff to stack demonstrators in pods on top of each other.

Hodgson said the company offers a remedy for dealers without space to display expanding model ranges from manufacturers.