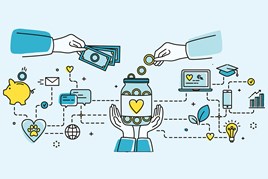 Starting up and growing a car dealership requires significant investment. From sponsored dealer programmes to stock market flotations, there are numerous ways to attempt to draw funding into a business. Here we take a look at the different funding models available, examples of how they can work in practice, and the pros and cons of each one:

Getting financial backing from a manufacturer’s sponsored dealer programme is one of the most obvious ways of securing funding for your business.

The rigorous approval and selection process involved preparing a five-year business plan and cash flow forecast using an approved accountant, an in-depth interview, and assessment by Seat, VW and a third-party agency.

Williams was provided with a non-interest-bearing loan to cover his initial working capital and set-up costs as well as funding lines for new  car consignment and used car stock.

The seven-year loan included a repayment schedule that began after the second year and stepped up over the following years until it was cleared.

The programme also met all his legal and start-up costs and Williams was assigned a member of Volkswagen’s network risk team as well as a member of the network development team, who carried out periodic reviews of the business’s performance and operational activity.

“As an individual who didn’t have the capital to buy a dealership outright or perhaps the required collateral to have supported the purchase and stocking requirements of a franchised motor retailer from a bank or other financial institution, it allowed me to fund my own business start-up,” said Williams.

“For the brand and Volkswagen Group, it provided the benefit of ensuring there was transparency in terms of my trading position and cash flow to all stakeholders.”

However, Williams said it wasn’t without its downsides, including meeting the needs of the various stakeholders, which were often different and sometimes at odds.

Luscombe said the new enterprise was a “matchmaker” that would pair entrepreneurial automotive professionals with businesses that “were keen to sell but had little or no succession planning”.

He said: “Running my own dealership gives me everything I ever wanted and being involved in Tempus excites me even more, as this is a route to assist other high-quality colleagues in the sector in making their first venture as an owner-driver.”

Luscombe said prospective car dealers had been put off by set-up costs of £500,000 to £1m, but Tempus would help peg that initial cost to about £150,000, ensuring funding for the set-up and establishment of the business, along with mentoring.

Tempus aims to provide funding for 10 franchised businesses within the next three years.

Kendrick said: “Tempus not only gives the opportunity for high-calibre operators in the sector to set up their own business, but also provides a great exit route for many owner-drivers who may wish to retire or PLC’s to dispose of non-core dealerships.”

Floating your business on the stock market can liberate a far greater level of investment as a public limited company.

Daksh Gupta, chief executive of Marshalls Motor Holdings, said his company raised £40 million from its initial public offering (IPO) in March 2015, selling a 35% stake to investors. Its former parent, Marshall of Cambridge (Holdings), retained the other 65%.

“Our decision to list was around having greater access to capital and effectively being an independent company with its own governance and board,” said Gupta.

“One of the other key drivers was the sheer increase in consolidations since 2002 and the need to invest heavily in our facilities and corporate identity.”

Planning and preparation for the IPO had started two years earlier and required significant time and money to get to the stage where the company was ready to launch, he said.

“It’s pretty much a 24/7 process where the company is literally shaken to the ground,” he said. “They look at everything from your personal tax records, to your assets and debts until they are satisfied that you meet the requirements.”

The whole listing process costs about £3m to £4m, said Gupta, not to mention the ongoing commitment of interim and full-year reporting, analyst presentations, and meeting shareholders’ demands, as well as the cost of hiring a broker and PR firm.

“Looking at what we have achieved since we floated, with £130m worth of acquisitions and the investment of £90m in our facilities over three years, frankly we wouldn’t have been able to do any of that if we hadn’t listed,” he said.

“The IPO has enabled us to continue on our growth trajectory and we are looking to maintain that momentum.”

Remortgaging your home to start up your own business or putting up your own money as part of a management buy-out (MBO) can be a risky strategy, but some dealers have prospered.

The first was headed by sales director Alan Bentley, along with Khan and two other directors, Nicky Dalkin and Graeme Armstrong, when, in 1995, they bought out the Jennings family’s 60% stake through funding from Midland Bank (now HSBC).

However, 10 years later, Khan led a new MBO, buying out Bentley and the remaining 40% stake held by the Hodgson family, splitting the shares between himself, Dalkin and Armstrong.

To finance the deal, they used the company’s Middlesbrough site to do a sale and leaseback, as well as increasing borrowing from HSBC and receiving some financial assistance from Ford.

But after the 2008 financial crisis, Khan said cash flow became constrained, so he led another MBO in 2012, financed by the 2010 sale of the company’s Sunderland site to Sainsbury’s.

He bought out his two partners and was able to put the company on a better financial footing.

“The downside is that life can be difficult at times because you are using your own working capital and are forever relying on short-term financing,” he said.

“But the big advantage is that you are your own boss, whereas with venture capital backing you are not fully in control of your business because you have got a multitude of investors to answer to.”