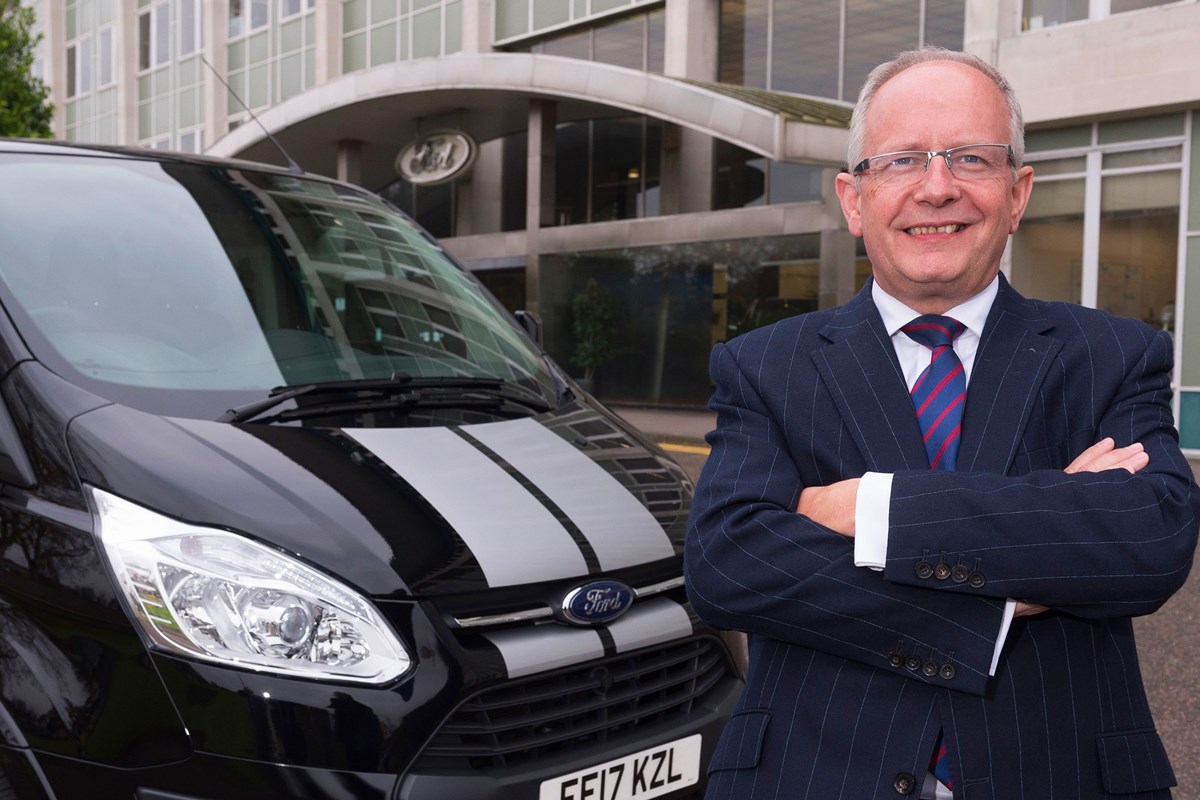 Franchised dealers are yet to embrace the “revolutions” in technology and mobility  that affect their businesses, according to Andy Barratt, the chairman and managing director of Ford of Britain. However, he is optimistic that his dealers will rise to the challenge and keen to guide them on the journey.

“We have so many revolutions going on – powertrain, ownership, connectivity and alternative mobility. It’s the most exciting industry to be in right now,” said Barratt.

Changes are bringing some pain to all franchised networks. Having invested heavily in showrooms and technology for face-to-face transactions, swathes of potential customers are on the cusp of embracing online car-buying or adopting alternative urban transport solutions altogether.

Coupled with other rising costs, such as rising technicians’ pay, the living wage, pension auto-enrolment and the apprenticeship levy, “the dealer body has a multi-million pound bill for doing nothing different”, said Barratt.

“The biggest challenge for me around the retail network is getting them to understand the retail landscape is changing. The gig economy has been here for many years, and yet a lot of the retail network really has not embraced digital in the way they should. There are one or two front-runners, but most are followers.”

He said the digital economy entered the aftersales arena very quickly, such as through video health checks, diagnostics and telematics-based prognostics. But Barratt believes dealers and carmakers need to do more, to both better satisfy customers and to become aspirational enough to attract the recruits the industry needs.

He said Ford is committed to tackling the wider issues, such as clean air policies, and is trialling solutions. It has launched a ‘Chariot London’ commuter shuttle service, booked and paid for by smartphone. Transit minibuses operate on four routes that are poorly served by public transport.

Ford was also among the first manufacturers to launch a scrappage scheme last September, which many other brands followed.

Barratt conceded that the schemes  helped to prop up a rapidly declining new car market, which overall ended 5.7% behind the 2016 total (Ford’s new car registrations were down 9.7% in 2017, but its LCVs rose by almost 2%). Without the schemes, Barratt said the market would have declined by a further 2ppts.

Ford recorded 10,000 scrappage sales by the end of 2017. To benefit from Ford’s saving of between £2,000 and £4,950 (depending on the new car purchased), qualifying trade-ins had to be registered pre-2011, so Barratt is confident the scheme attracted fresh buyers and removed less efficient vehicles from the roads.

“We remain true to what we’re trying to do on scrappage. It has to be an environmental story. We were clear that scrappage means scrappage, every car has to have a full destruction certificate, and we audit that.”

Barratt said Ford is concerned with improving air quality and knows steps must be taken every year to prepare for 2040, when all new cars sold will have to be AFVs.

“If it genuinely is a clean air programme, which it is for Ford because we’re doing it elsewhere in Europe, you cannot run it for four months and be credible.

“We always said we would run it as a pilot scheme and see what the impact is. It was incredibly positive, and we have to continue.

Ford has  extended its scrappage offer into Q1 2018.

“It’s definitely the space where the market-leader should be, and should set the drumbeat. It’s not something where we’re looking for the advantage. We’re looking to do the right thing.”

Barratt said there needs to be more re-education of consumers about what comes out a car’s tailpipe, and there are still plenty of people for whom diesels in Euro 6 or 6.2 form are the right answer.

Nevertheless, he said Ford has benefited from the popularity of its Ecoboost petrol engines.

It has not been completely protected, however. Ford’s car registrations in 2017 were 33% diesel and 67% petrol. Two months into 2018, the mix was 26% diesel and 74% petrol. Hybrid powertrains are currently only offered on the Mondeo, but more are promised by 2022, and a Focus Electric is in the wings, waiting, Ford said, “for when there’s a market for it in volume”.

Barratt said modelling shows that changes to modern vehicles means the biggest contributor to poor air quality in London “very shortly will no longer be vehicles”. That wider story needs to be constantly communicated, he said.

“As an industry we’ve come a long way, and we need to make sure everyone understands the journey we’ve been on and that we continue to be on.”

Ford has 20 Transit petrol PHEV vans that will take part in a trial scheme with fleet partners from April, ahead of a production van launch in 2019. These will test a telematics service, which will track how the vans operate on petrol or electric-only in the relevant operating zones. In the longer term, the telematics service will be provided for other vehicles too – 90% of Fords will have connectivity by 2020.

‘We can do so much better’

Commercial vehicles are a pillar of strength for Ford’s network and fleet operation – 2017 was a new record, with 123,958 new vans and pick-ups registered. But Barratt believes there are still richer pickings to be had.

“I’m still not satisfied. I think we can do so much better than where we are today. Transit remains the benchmark vehicle, and I need our Transit centres to become the benchmark dealers – some are already, some aren’t – and we need to continue to innovate in that space to become the supplier of choice.”

One such example is Ford’s mobile service vans, operated by its Transit Centres. There are more than 100 vans, capable of reaching 85% of the population within 40 minutes. Barratt said Ford needs to continue to understand better what makes a buyer want a van, how it works for them, and how Ford can make it even more convenient for them to operate it in their business.

“If I’m a construction worker or a joiner or whatever, why can’t Ford come along to service my Transit while I continue to earn money? That’s exactly the kind of innovation that will help keep Transit at the top of the charts.”

Barratt said he expects demand for mobile servicing to rise quickly. Ford is bringing fleet operators into the programme, and he said there are efficiencies for dealers too – going to a customer’s yard,  you may be able to service five Transits in an evening.

Although retail customers have not latched on to it, he sees a similar programme working for private motorists, too.

Ford has provided some central support to equip the service vans with specialist tooling, diagnostic kit and communications devices, but Barratt said it has to stand up as a profit centre for dealers in its own right.

“It’s joined-up thinking between sales and aftersales, innovating in the customer space. In a world of customer choice and future mobility, it’s another proposition for the customer that cuts through for the franchised dealer. To maintain the volume of commercial vehicle sales we are doing, we need to continue to look for spaces where customers have the confidence that we understand their business.”

Transit Centres provide guaranteed service levels under the Transit 24 programme, such as extended hours servicing, while-you-wait bookings and collection and delivery. They also supply factory-fresh converted vans, such as tippers and Lutons, as a “turn-key operation”, said Barratt.

He added: “With a lot of our customers for these, it’s because they’ve won a contract this week and they need the vehicle. If our dealers can put keys in their hand within a week, they’re not going elsewhere.”

A joined-up approach to CV success

Barratt said success in commercial vehicles is about joining up the services, through telematics, helping them to fund the vehicle with specific Ford Credit lines for commercial vehicles, and monthly service and maintenance plans.

He has high hopes for Ford dealers’ fortunes once connectivity and telematics become mainstream in cars and LCVs. The challenge will be in convincing the customer to switch them on, but the data available to the manufacturer and the dealer will give them a real advantage in delivering an exceptional customer experience, by ultimately preventing any downtime in a car or commercial vehicle.

In the meantime, the dealer network has plenty to get on with, after several years of high new vehicle sales. 2018 will bring more derivatives of the new Fiesta, including Active and ST lines, plus a new Ecosport and Focus, and updated Transit Custom.

‘Talk yourself into growth’

In 2017, the Ford network’s average return-on-sales figure was about 1.2%, which Barratt emphasised was a good result for a brand built for volume and lots of fleet business.

Dealers were pretty happy, he said, and that has since been backed up by recent NFDA Dealer Attitude Survey results showing Ford scoring 6 out of 10 for overall value of the franchise (marginally down from 6.1 in the previous survey, but ahead of the average score of 5.3).

Overall, however, the network has reduced from 550 sites in 2013 to 460 locations, as regional groups have merged smaller sales points into larger FordStores and some of its owner-drivers exited, allowing Ford to remove sales points.

Barratt said it has been a natural attrition, and he now believes Ford UK has the best retail network in Europe.

There are still challenges ahead, but Barratt remains confident: “It’s all fixable.”