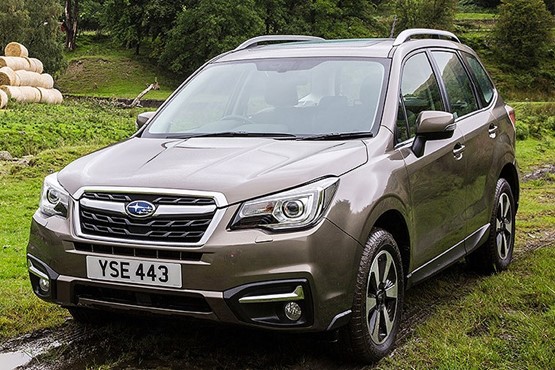 After a year the brand would perhaps rather forget, Subaru in the UK is confident the changes it has introduced will boost sales and improve dealer satisfaction, with managing director Chris Graham telling AM: “We are definitely not doing business like it has always been done before.”

Imported and distributed by the IM Group in the UK, Subaru did not have a banner year in 2017 – new car registrations were 2,679, the lowest total since 2013, and a 26% year-on-year fall. Its overall score in the National Franchised Dealers Association’s six-monthly Dealer Attitude Survey fell from 7.1 in winter 2017 to 4.2 in summer 2017.

However, the appointment of Graham in February as a new broom, along with the launch of its ‘Better Where It Matters’ marketing campaign, demonstrate IM Group’s intention to reboot Subaru in the UK.

The brand’s Q1 2018 results suggest it is moving in the right direction, with registrations improving by 5.5%. Graham attributed the improvement to a new relationship with the brand’s headquarters in Japan.

“The way that Subaru worked with us is that they will give us production to cover the volume. If the volume goes down, the production goes down, so it’s very difficult to break that trend.

“But at the end of last year, Torbjörn Lillrud, who was managing director for IM Nordic, joined the UK business as group development director. He has had a long history with Subaru and has a fantastic relationship with the Japanese.

“Because of that relationship, he said to them: ‘We have to break this cycle. If you’re serious about the UK, we have to have production’.

“So, remarkably, we have now got the production. At the moment our production level is actually as high or higher than our sales expectation, so we can confidently go to market, spend significantly more than we did in 2016 or 2017 on marketing to attract new customers, with the confidence that when the customer comes in, the dealers have got the cars, or availability of cars.”

A renewed focus on product

Graham said the order bank is currently very strong: “We’ve got orders now, not just for XV, but across the range, particularly with Forester and Outback, running into July. That’s not something we’ve seen before.”

There also seems to be a renewed product focus for the brand, with the emphasis on safety, rather than the sportier elements of the past.

“Subaru’s ambition is to become the safest SUV producer in the world,” said Graham.

“That will come from those three products – the XV, the Forester and the Outback. We will still keep the BRZ and we still have availability of Levorg as well. The only thing we don’t have in our range now is STI. We’re incredibly proud of the heritage and everything that STI has brought to the brand over many, many years, but for Subaru, their production and their forward thinking is more based around the SUV market.”

However, that SUV market is highly competitive, with manufacturers launching new models, of all sizes, on an almost monthly basis. The absence of the Impreza – which was responsible for thousands of UK sales in its late 1990s/early 2000s heyday – means there is not a model to fall back on that consumers engage with on an emotional level. Does that threaten Subaru’s presence in the UK market? Is there a sales baseline below which IM will consider the brand non-viable?

Graham doesn’t think so. “We are absolutely 100% committed. We’ve been with the brand since 1987. As a business, there would be a critical number of vehicles that you have to sell for us to be able to keep the doors open. But even if you set a target of selling just 1,000 cars and you had a dealer network that was set up to sell only 1,000 vehicles, you could be viable doing that. It wouldn’t be what I would call a successful business and we wouldn’t ever want to look at that.

“Even going down to the volumes we did in 2017, at no point were there any conversations within the group about Subaru viability.”

Jumping the gun on diesel

Like every other carmaker, the downturn in diesel has had an effect on Subaru in the UK, but Graham frankly admits that the company got it badly wrong, when it told dealers diesel was dead.

This resulted in some dealers taking that message literally, even telling customers that Subaru was no longer making diesels. The company has subsequently apologised to dealers for jumping the gun and diesel sales have improved, after they fell from about 30% of total volume to 12%.

Even owners from Subaru’s traditional customer base in rural and farming communities have started to shift to petrol-engined cars, but Graham is not too concerned that the shift will mean losing them as customers, even if Subaru launches hybrids or EVs in the UK in the coming years.

“Undoubtedly we will lose some, as all manufacturers will.

“Some of our very long-term customers – and we’re talking about families who have multiple numbers of Subarus – are making the move currently to petrol. When and if we get hybrid-engined cars, will they make that change?

“I think there’s a core that understand what Subaru means to them – irrespective of whether there’s a diesel, petrol, hybrid or electric powertrain, I think there is a core that will buy. We are seeing that very much with new XV buyers – the number of conquests is dramatically improving.

“I’m quite sure that trend will continue, as we have new model Forester and new model Outback eventually. Hybrid would be something that they would be looking for at that point.”

If Subaru is confident about retaining its relationship with customers, what about its relationship with its dealers? The NFDA surveys from last year suggest that there’s an awful lot of work to do – which is supported by some of the attitudes that Graham experienced at a dealer conference in January.

“We had dealers that were ready to resign. We had a dealer who brought his resignation letter, but waited to see what happened at the conference –  and it was a conference like they had never seen before. We changed so many things, which they thought we would never change. After it, he rang his business and said, ‘This is not the last day for Subaru – this is the first day of the new Subaru.’ That’s a very satisfying thing to do.”

Subaru believes it has won over its dealers with a package that includes the easier access to cars and measures that will help dealers in practical, operational ways.

“We asked dealers at our national and regional conferences what they wanted, and we gave them a number of items that they asked for. One, for instance, was simply how we would put a demonstrator on a demonstrator plan, and the cost of running a demonstrator. So we have simplified that, we have helped their cash flow and we are giving them more training support.

“We’re giving more advice on how to conduct the test drive in the right way, to make sure that all of the technology in particular is explained thoroughly and properly and let the customer experience the technology. When they move across a lane, and the sound is going, and then the dashboard is flashing, they understand what it is, and are not put off by it, frightened by it, or concerned by it.”

Graham said Subaru had also committed to spend more on marketing, to drive more footfall to the showrooms in quarter one.

“All these kind of things make a big difference to a dealer.”

With Subaru being a relatively low-volume manufacturer, dealers’ reliance on used car sales also requires support. Subaru helps this, said Graham, by having structures in place that help to make a steady supply of vehicles that have previously been used by ambassadors or corporate partners available to the network, instead of selling them outside the business. Dealers are also proactive in picking up cars from private sellers, with the overall result that few Subarus go thorough open auction.

Graham’s view is clearly that Subaru and its dealers should all play to their strengths of being small businesses with strong interpersonal links to their customers.

“One of the things we say to our dealers is that we are never going to be able to provide them with a footfall that Ford can.”

However, he added that when a customer comes in, the dealer can spend the time to show that a Subaru is an interesting product and turn them into a conquest customer.

“An existing customer seems to get it. If they didn’t get it, they wouldn’t have had a second, and a third, and a fourth, and a fifth car. With a new customer, all they need to do is just sit with them and just explain the features that our car has that will be of benefit to them. That’s what we’re working on with the training. They’ve done it for a long time, we’re just kind of formalising it a little bit more now.

“I think our dealers know their customers very, very well. There’s a great personal relationship that’s built up over a number of years, particularly for the more historic Subaru buyer. And they’re developing that into the new ones.”

That family of dealerships is also growing, despite the woes of 2017. Subaru has just announced the opening of four new franchises, taking the national total up to 76. Graham hopes it won’t end there, either, and has one eye on more growth, with the aim of reaching 82  sites by the end of this year.

“We have a number of open points. We would like to close those as soon as we possibly can. We’ve just changed our franchise offering, in terms of entry costs, etc., to new incomers. We have got quite a large open day here on May 30, where we have invited prospects that we have seen previously that maybe didn’t like the proposition that was put to them at that time.

“We think the new proposition and the way we now work – which is simple, fun and profitable – will change a number of people’s perceptions, so maybe they’ll look again at the decision they made previously.

“I think we’ve probably got back some of the magic that Subaru had back in the late 1990s and early 2000s.

“It would be very easy to say we want to do 3,500 cars this year, 6,500 next year, 10,000 the year after. We will call next year probably around September time – probably when the September market’s done – because we have to order the cars for 2019. We will make some decisions at that point. But the way things are, the trends, the feel and the positivity that we seem to have, the customer experience of the CSI, all of the KPIs that you would normally look at, are all moving upwards.”