Strong financial reports from across the car retail sector have reaffirmed that businesses have weathered the COVID-19 crisis without the “Darwinian evolution” predicted 12 months ago.

Fiscal support from the UK Government and buoyant used car values have been credited with isolating dealers from the worst effects of the economic downturn triggered by the pandemic as experienced by hospitality and other parts of the retail sector.

As car retailers began to set their sights on accelerating their recovery in the months ahead, however, some major headwinds remain. Semiconductor shortages exacerbate existing new car supply issues and threaten to send already buoyant used car values soaring.

Outgoing AES Global chairman Mike Jones hopes that this year’s challenges can be weathered by businesses who may have grown used to operating “lean” with the help of Government’s fiscal support measures.

Jones said the UK Government’s Coronavirus Job Retention Scheme (CJRS) and rates relief had combined with support from car manufacturers to such effect last year that “had it not been for the December lockdown car retailers would have made more, on average, than in 2019”.

“It’s undoubtedly the case that the sector has fared far better than anybody expected last year,” he said.

“My main concern is that the results achieved by many operators have been achieved by operating on a very low-cost model. I would expect a lot of those costs to be demanded once again now that showroom doors are back open.”

ASE reported in February that the retailers achieved an average return on sales (RoS) figure of 0.94% in 2020, compared with 0.81% in the previous year.

As AM went to press, positivity prevailed as many retailers emerged from Q1 in good financial shape and with hope for the months ahead.

The Bank of England also upgraded its projections amid what governor Andrew Bailey asserted was a “bounce back” and not a “boom”.

Optimism for retailers will come from the BoE forecast that consumer spending would be a main driver of the recovery, with people spending an estimated 10% of

their accumulated lockdown savings this year.

Cambria Automotive, meanwhile, used its recent trading update to communicate its strong balance sheet. As chief executive Mark Lavery revealed that the strength of the sector after a tough 2020 was all that was holding the group back from stage four of its roadmap to recovery – growing through acquisition.

He said: “A year ago I predicted a Darwinian evolution of the car retail sector and, thankfully, that hasn’t proved to be the case.

Lavery, who reflected on the “difficulty” of making redundancies during a 2020 restructure, said: “Ultimately, we have to be thankful that we have emerged with a resilient business. We’re leaner than ever and remain in a position that allows us to explore the possibility of acquisitions and growth.”

The group said the results had reaffirmed that directors made the right decision in returning the vast majority of the workforce back into the business in May of last year.

Director Peter Smyth told AM that momentum had grown still further in Q1, adding: “We’ve seen another spike since April 12, particularly with brands like Honda and Peugeot.

“I suspect the older demographic that wants to come into the showroom to see and feel a car before making a purchase has now had their jab and that’s given them the confidence they needed to get out a little more. It’s really encouraging.” 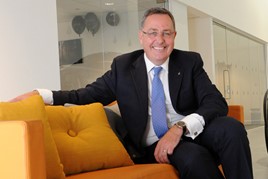 Waylands managing director John O’Hanlon joined Swansway in crediting the presence of staff in the business for a strong set of financial results in 2020, alongside a level of digital readiness.

O’Hanlon said: “The truth is we make money when people are here. Furlough was a comfort blanket that allowed us time to make plans.”

Finance director James Smullen said: “In March, we had 95% of the workforce on furlough and in May we had 85% back in and that really helped us to respond quickly when the market returned.”

Waylands Automotive delivered a 4% increase in revenues to £89m and 150% rise in pre-tax profits to £1.25m from its network of four Volvo dealerships last year.

“We could talk about some of the tailwinds, particularly the Government support, but the results also recognise the benefits of the scale of the group now,” said O’Hanlon.

Jones suggested that 2021 may yet prove an acid test for certain retailers as they leave behind the relative comfort of Government support.

A new car volume resurgence stymied by a global shortage of semiconductor chips will be another unwelcome hurdle in the roadmap to recovery.

In April, Nissan adjusted its shift patterns at Plant Sunderland, Jaguar Land Rover (JLR) temporarily closed its Castle Bromwich and Halewood plants, and BMW halted production lines at its Oxford Mini factory for a week, all due to semiconductor supply constraints.

Farley said: “Estimates project the full recovery of the auto chip supply will stretch into fourth quarter of this year and possibly even into 2022, making industry volume recovery in the second half of this year even more challenging.”

Cox Automotive insight and strategy director, Philip Nothard, said the semiconductor shortages “could have a more significant impact on the vehicle retail sector than coronavirus itself”, with a shortage of part-exchanges exacerbating a used car market already short of stock.

“With new-car supply limping, there will be fewer part-exchanges available for dealers to take advantage of, triggering a reduced supply of used cars into the market,” he said.

“Furthermore, fewer cars will go into fleet channels, affecting de-fleeting and will continue to affect used supply. These challenges could well leave the market reeling until deep into 2022.”

Smyth told AM the effects of factory closures were already being felt in its dealerships as the group was struggling to get hold of sufficient volumes of cars and vans.

Lavery said one of his group’s franchises had a single car remaining in stock during the first week of May, with no new stock expected until the following month.

Waylands’ major franchise partner, Volvo, was credited with doing all it could to keep O’Hanlon up-to-date on any production hold-ups, but he said: “There will be reduction in new car supply in Q2 and Q3.”

And Waylands was one of many businesses struggling to source used cars as demand starts to outstrip growing supply issues – the group running with 60% of its normal stock.

Prices are expected to continue to strengthen as both the new and used car supplies continue to struggle to meet growing consumer demand. Nothard said: “While we’ve had a great short-term boost to vehicle retail, dealers should not expect supplies of either new or used stock in great numbers any time soon.”

While many of 2021’s headwinds might have gone, there remains a sense that this year won’t be plain sailing. TOM SHARPE