How car dealers can navigate the cash flow peaks and troughs 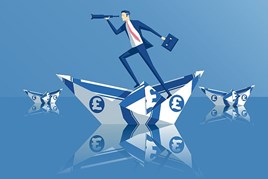 Managing cash flow is essential in any business, but the more pronounced peaks and troughs of motor retail – made worse by events such as the VED road tax change and Brexit uncertainty – make effective cash flow management even more of a challenge for car dealers.

Robust forecasting and a solid relationship with franchise partners and the bank manager are the starting points for tackling issues with liquidity, according to Paul Daly, a partner at UHY Hacker Young. He said: “The peaks and troughs of the year are a massive issue.

“Dealers can often be cash flow-negative before bonuses for the quarter are collected, with dealers making a loss on cars until that bonus comes in.”

The pressure from volume targets can then bias activity on registrations towards the ends of quarters, with the market loading 50% of targeted registrations on the last two days of the month.

Mike Jones, ASE chairman, said the size of the quarterly bonuses varies greatly between franchises, but most are paid at the end of the quarter.

Jones said: “It’s really difficult to generalise, but clearly Q1 will be the biggest, followed by Q3, then either Q4 and Q2, but these can change depending on activity with used cars, aftersales etc.

“There is barely a dealer in the UK that would make a profit without the bonus payments.”

Parry said: “Even very experienced financial directors can be caught out, particularly if a manufacturer has moved the direct debit date.”

"The peaks and troughs of the year are a massive issue. Dealers can often be cash flow-negative before bonuses for the quarter are collected" Paul Daly, UHY Hacker Young

Craig Fraser, Harratts’ operations director, said some franchises are getting better at understanding how important cash flow is for dealers.

He said: “Around 50% of manufacturers will work with dealers to give up-front bonus payments at the start of the quarter. If targets aren’t met, the money has to be paid back.

“Some manufacturers will give you a total quarter target, but if you hit a month one ‘fast start’ target, they will release some bonus payment early, which can also help.”

Fraser said the biggest aspect of managing the financial peaks and troughs is a focus on improving profit in periods other than the ends of quarters, as well as getting the cost base of the business as tight as possible to absorb any shocks.

Parry said that due to the predictability of the plate-change peaks, it is relatively easy to plan flexibility with overdraft facilities.

However, the peaks throughout the year are becoming more frequent and more unpredictable, he said.

“They are not to the same level as March and September, but quarter-end deals outside those peak months are happening with deals from the manufacturer that are ‘not to be missed’.

“There are those with the cash flow out there that can carefully manage those deals, but dealers that don’t have reserves shouldn’t find themselves in a position where they are being forced to participate to achieve bonus. If they do find themselves in that position, they should be having a serious conversation with their franchise partner.”

Get your forecasting right

Daly said the most important thing in addressing cash flow issues is to put a robust forecasting plan together, looking four to six weeks in advance, which  helps to avoid the “head in the sand mentality” that  banks and manufacturers “don’t want to see”.

Forecasting depends on a good overview of the order book, which Daly said some businesses still lack: “It’s all about looking ahead and being prepared.”

Daly said it can be a lot of work to introduce new digital disciplines across multiple sites: “While there is still value in the visual of the whiteboard, dealers need to compile this data digitally and you need the order book to have information in exact values, whether it’s cash or finance, when it is due to be delivered, to really help with the forecasting. A lot of the time that detail is not there.”

Jones said dealers should focus on the things inside their control, backed up by daily  meetings about debtors and sales and accounts teams that are “talking with each other”.

“A good relationship with your bank is vital. The banks have moved on from granting temporary overdrafts over the phone. They are now looking at affordability and dealers need to do more prep and need more support from the finance team.”

Do not sit on stock

Fraser said: “Every car that can be funded should be. You want to make sure you are trading out of auction cars as quickly as possible and you are not sitting on stock.”

Harratts uses Manheim’s Seller Advance to get cash back to the business from auction stock within three days by BACS transfer, rather than alternatives that can take as much as 10 days.

Fraser said: “It means you have cash coming back in quickly.”

Daly said stock-funding facilities are one of the first things that should be looked at in a cash flow review.

He recommends reviewing stock-funding facilities with the manufacturers’ finance houses – what facilities does the dealer have in place for new, used and demos and is it balanced correctly?

Daly said: “You may have £2m on new, £1m on demos and £1m on used. It may turn out that you only need £1.5m on new, so you can move facilities to help fund used and demo stock to free up cash.

“The key point is, as an owner or dealer principal, are you getting data on how many vehicles are in stock and how many of those are being funded? All too often we find processes are not in place to ensure stock is funded on time, every time.”

Dealers’ biggest outgoings will be payroll and there’s not much they can do about those terms.

However, Fraser said while it is good business to make sure any suppliers are paid within the terms set, it is possible to give partners a heads-up on specific months where payment terms may need to be stretched.

There should also be good communication between the dealer and manufacturer about when a direct debit will be taken for stock.

Parry said: “If the manufacturer decides to pull a direct debit a day early on a lot of cars, that can have a big impact on cash flow.

“A day late or a day early can make a massive difference. You don’t want any surprises.”

Some manufacturers will put vehicles on a free stocking finance plan, but that only lasts for a certain number of days.

Parry said dealers can miss when vehicles fall off that free stocking plan and be in a position where there is no re-financing in place.

Daly said being able to give visibility on whether facilities will be breached four to six weeks out gives manufacturers confidence that they are dealing with someone who is in control of their business.

He said: “In some cases, with enough warning, manufacturers may even delay direct debits to help free up cash.”

Dealers who are really under pressure for cash can apply for a special “time to pay” extension on tax bills to the HMRC.

However, this can only be done once every couple of years and, according to Fraser, the taxman will only be understanding if it’s a rare occasion.

Daly said some manufacturers are providing a VAT invoice at the point the vehicle is consigned.

This means the dealer can claim back the 20% VAT and then they don’t have to pay out that tax until the quarter the car is sold.

The net impact is that dealers have the VAT on consignment stock sitting within their cash flow.

Daly said: “This is really helping dealers at the moment, as consignment stock levels are incredibly high.

“It’s a bit of a perverse situation where high stock levels are helping to boost cash flow, but if stock levels drop, this arrangement will be put into reverse with VAT being paid back again.”

Jones said dealers are “working their backsides off” to close out the year after the industry saw a record Q1, but a much quieter Q2.

He said: “I think the industry is reasonably positive about profits for the year as a whole. It’s still too early to call. Dealers are up against a record year in 2016, so it will be tough.

“We’ll have to see how things ramp up and whether the market will be pushed.”

Parry said he has seen some manufacturers revisiting targets in light of the slowdown of Q2 into the close of the year.

He said: “However they do it, manufacturers need to adjust to a reducing market to protect dealer profitability, because that will come through to cash flow eventually.”