How your dealerships can build trust in the local community 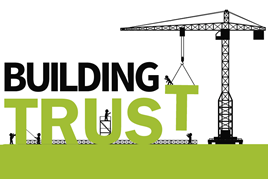 Car dealerships are often strongly associated with helping community sports clubs and fundraising for charitable causes. But is being a part of the local community helpful for building trust with customers?

While most customers are likely to say a charitable and socially engaged business is a good thing, would they acknowledge that it would be a factor in determining whether they found a business more or less trustworthy?

For Grant Long, the managing director of Norfolk Motor Group, (NMG) being a family-owned business and part of the local community go hand-in hand.

“We try to spread ourselves across as many marketing channels as possible. But getting involved in the community isn’t about money-grabbing,” he said.

“I have gone along to school competitions and ended up in the local paper, although that wasn’t the intention.

“We’re a family business and I think supporting the local community comes hand-in-hand with that.”

The local community often approaches NMG for help, said Long, and the group sponsors local sports clubs, school projects and fundraising events. He said the idea is not to make them opportunities to sell, but the brand awareness is an added bonus.

“If a mum or dad happened to see our logo on their child’s football kit, maybe they’ll get a warm feeling and think about how we’ve helped out the local club and consider us in the future,” he said.

“These things are actually a pretty good investment for the business in terms of advertising. I could spend the same amount for one weekend in the newspaper versus a full football or cricket season of sponsorship, so I think you’re getting much better value.”

NMG’s sponsorship of a local cricket club, or supplying a vehicle for the local gym manager, brings the opportunity to display cars as additional advertising.

Long said budgets have been diverted from things such as newspaper advertising to sponsorship and digital media to keep the business’s marketing relevant.

He said sponsorship decisions are usually based on the type of request and whether it’s in NMG’s immediate market area for its franchises. This is to make sure sponsorship opportunities are taken away from other dealers that represent that market area.

Some manufacturers run national community campaigns that are then delivered by dealers on a local level.

One of NMG’s franchises, Kia, sponsors cricket at The Oval. As part of that campaign, it introduced a national “Gift of Kit” initiative to support grass-roots cricket. Each of Kia’s dealerships was tasked with supporting a minimum of three cricket teams and NMG now supports seven.

Managers at NMG’s Kia business are required to put a quarterly marketing plan together. This has to feature a spread of marketing and events activities, with a proportion involving the local community.

As part of its ‘Gift of Kit’ to Brooke & District’s under-19 cricket club, NMG and Kia also supplied a cricket bat signed by former England cricket captain Alec Stewart OBE for the club to auction at its annual sponsors’ event.

Graeme Potts, the chief executive of Eden Motor Group, said getting involved with the local community is totally separate to commercial motivations.

Eden donates to Ben, the automotive industry charity, through its pound per car sold scheme, but this isn’t something that’s promoted. Eden also supports Macmillan through fundraising coffee mornings.

General managers at Eden are given autonomy over decisions such as donating kits to football clubs. Larger sponsorship decisions or donations are handled by either Potts or the financial director.

Potts said: “Nine times out of 10, we’ll just say yes. If we’re paying a bit of money for some kit for a school, that’s fine. We try very hard to say yes.”

Potts said there is definitely an expectation from local organisations that a dealership should be involved in the local community, but in terms of this being a factor for developing trust with customers, he’s not so sure.

He said: “Car buying, for the majority of customers, is driven by financial factors. For us, local community support is just totally separate in my mind from what we’re doing commercially.”

Potts said if a dealership has a good marketing strategy, incorporating digital media, there should already be visibility in the local market.

He said: “The marketing return on something like a local football team sponsorship wouldn’t be as high, so we would just be doing it purely because it’s the right thing to do.”

Paul Woodhouse, Vindis Group’s head of marketing, decided to centralise the company’s community engagement and make it more strategic about two years ago.

He said: “Before that, we were doing a lot of little things, which is great, but we wanted to make sure we were working towards an end goal that would actually make a difference to the community.”

Under the old system, letters seeking donations and approaches for support in the form of cars or financial help would be sent to each dealership, but now these are forwarded to Vindis’ head office.

Woodhouse said: “I think the hardest thing to come to terms with is that you just can’t say yes to everything. Of course we want to help as much we can, but we wanted to think about things a bit more strategically.”

Vindis partnered with Macmillan Cancer Support to raise funds towards a central goal. Since September 2015, the group has been raising money to help fund nurses in the Cambridgeshire and Bedfordshire areas (locations where Vindis Group operates).

The business has raised £52,000 for charity through events such as the Three Peaks Challenge, which members of the senior management team also get involved with.

Woodhouse said: “There’s definitely an expectation from customers that you should be involved in the local community and give something back.

“We look at our corporate social responsibility and there’s a big focus on that as a family-run and -owned company. We feel there’s a need to keep a link with the local community as it’s also somewhere our staff live and work.”

While Woodhouse said charitable work or sponsorship deals with local clubs cannot be viewed solely by what the business can get out of it, it does have to play some part.

He said: “You have to keep in mind your business objectives and I think charities and clubs are definitely sympathetic to that. They know that it’s not going to be unreasonable for there to be some sort of benefit to the company too, whether that’s getting the name out there or some PR.”

How will GDPR affect dealer-community communication?

Some of NMG’s previous sponsorship deals involved clubs sharing their mailing databases with the group in cases where a fan or follower of the club had indicated they were happy to share their details.

This approach will have to change under the forthcoming General Data Protection Regulation (GDPR) as NMG will need to seek new permissions to contact those customers.

Long said: “I used to write to the cricket club once a year, I would never bombard them with marketing messages. But that approach will have to change under GDPR, so it’s another element of it to think about.”

Robin Luscombe, the business’s owner, is also featured in a lot of the business’ marketing, putting a face to the business. This includes videos on Luscombe’s YouTube channel with messages about cars, advice about vehicles and updates on the business and the team that works there.

He said: “It’s informal, but professional. You can develop trust online but it has to be people dealing with people, rather than something more corporate or robotic.

“I think if we’re approached on social media and what is being said is on display to the wider world, customers expect you to take the time to acknowledge, explain and engage, otherwise you can be seen as defensive.”

NMG doesn’t employ an agency or digital marketing manager, so social media and digital responses are taken on by the wider team. Again, a personable rather than corporate approach is taken.

Long said: “Social media and live chat has become so essential in terms of building trust and a conversation with customers.

“We actually incentivise sales executives now so they get a little bit extra if they answer a customer contact query when it’s out of hours.”

Handling complaints through social media or online reviews can also build trust through transparency. Kia’s partnership with Reevoo displays all negative reviews. Either Long or a manager can respond to any customer issues with alerts to their mobile and they will respond personally, rather than with a canned corporate response.