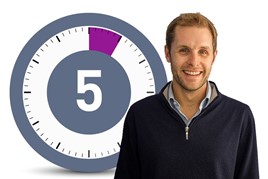 Cazana launched a fund-raising exercise earlier this year, with reports that it raised £1.5 million. Did the final amount exceed your expectations?

We actually raised £2.6m, significantly ahead of what we thought we might raise.

Will you be able to develop new services, and enhance existing platforms, ahead schedule because the fund-raising was so successful?

Yes. We can build out the tools for dealers and the insurance sector faster, and it also allows us to build out in new countries ahead of schedule.

We will soon be able to announce details about two country launches. One will be the US, but we can’t reveal the other at this stage. Even though we are still a very lean organisation, the Cazana team has grown from 20 in February to 34 by the end of May, reflecting the growth of our business.

How is the Car & Classic site performing, and what progress has there been on developing a mobile version?

When we bought the business in August 2018, the mobile strategy was rather old-fashioned and the site wasn’t performing as well on mobile as we thought it should, because it hadn’t had much investment for a long time.

We have now relaunched the site, so it works effectively on both desktop and mobile, and we are seeing a lot more customers coming from that direction. It doesn’t necessarily look a lot different, but it works much better.

The US has been a graveyard for many British companies over the decades, from M&S to PurpleBricks. Was that an influence on the decision to begin expansion there slowly – and through a partnership venture, rather than via a Big Bang launch?

To a degree. Launching a B2B product is different, of course, from a B2C product. We are fishing in a smaller pool and can be more direct.

Saying that, we are not precious about going into a market direct, we are very happy to choose best-of-breed partnerships, with people who already know a market, and so you will see us launch some very large partnerships in the coming months, with key players in different markets.

Our first US partnership, which we announced in June 2018, was with Ed Robinson, of Robinson Advisory, to support our expansion into that market. He was previously the chief executive of BMW Financial Services (USA), and that’s very much the calibre of individual with whom we are looking to engage.

You have already assembled an experienced UK-based executive team, including David Hammond, the chief executive of Camden Ventures; Robert Dighero, a partner at Passion Capital; and Rupert Pontin, as director of valuations.

Yes. Rupert is another good example of our recruitment philosophy. He has been around in the valuation space for a very long time, he understands how it works, and how we should communicate with the industry, and he’s doing a great job.

I still lead the sales team. Having built the company from the ground up, I naturally know a lot about the product, and that approach seems to be going very well.

Cazana’s latest update of the UK auto market predicted an ‘exciting and innovative year for all’, but what would you say to those dealers who are still feeling apprehensive because of the political and economic uncertainty?

What we’re seeing in the market is an increasing focus by dealers on the areas they can control. We’re finding that many dealers who are looking to grow their sales of used cars are keen to use new sources of data to drive increased sales.

However, there is also some uncertainty about the generation of new car sales, with platforms such as Carwow around, and also uncertainty about electric vehicles, where there’s less in it for dealers and for manufacturers.

As a result of those influences, we are seeing a lot of savvy dealers switching their strategies more towards used car sales, not least as a way of insulating their business against the current impact, and potential future impact, of the volatile political and economic environment.

It’s working, too. The people who are making that shift are reporting some excellent earnings at the moment, and we expect that to continue. IAN HALSTEAD