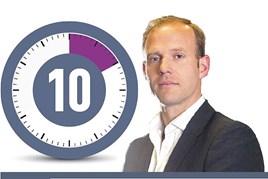 AM: What is your remit within the wider Cox Automotive organisation, which obviously includes established brands such as Manheim and NextGear Capital?

Martin Forbes: I look after what is, effectively, the retail division, solutions group and I also look after media, which is Motors.co.uk, then there’s the data side.

Manheim and the ‘power brands’, which we call inventory solutions, are what make the lion’s share of the business right now but there is a shift and it will continue to shift.

Our strategy in the UK and globally is that we’re not looking to invest in more land for more auctions.

More than 40% of cars now bought wholesale are on a digital channel which we’d expect to top 50% in around 18 months’ time. We need to embrace that.

People need to acknowledge that there is that shift. In the US you’ll see that there is where they’re spending money. Cox Automotive recently bought Dealertrak in a $4 billion acquisition and that really demonstrates the focus on digital.

AM: What is the biggest challenge presented by your role at Cox Automotive?

Martin Forbes: Definitely raising awareness of the services we offer across our various brands.

We’ve ramped up our advertising, so services like Modix, Xtime and CloseIt and Incadea are ‘out there’ now.

In December CarShop had its first senior leadership conference. World Class, it was called. I had a speaking slot. Our chief executive James Dunkley was up there. He gave us a great billing and the opening slide said Martin Forbes, Cox Automotive. I said: “Who in this room is familiar with Cox Automotive?” Two of the 300 people put their hands up.

I  then said: “Okay, who’s heard of Manheim?” Every hand went up.

Cox Automotive in the UK has a touchpoint with every single franchised dealer, OEM and independent.

Some will work with NextGear, Dealer Auction, some might do something with CloseIt but nobody realises Cox is part of the business.

AM: Modix deals with dealers’ digital marketing needs. Has it been primed to accommodate an online retailing solution to allow retailers to compete with the OEMs?

Martin Forbes: Next year the platform will be more focused on digital retailing. That is increasingly becoming a focus of manufacturers, but what we want to do is offer dealers the platform that will allow them to do it themselves.

Even with PSA and Hyundai’s systems, we actually power that underneath the surface. We manage the logistics, the valuation, the part-ex.

If OEMs were to talk together in a closed room I’m sure what they would say is ‘actually, if we can do all this online ourselves then we will, we don’t need the dealer,’ but at the moment they absolutely do need the dealers.

Right now I think OEMs would be foolish to cut the dealer out. Some are arrogant enough to say it, but it’s absolute rubbish.

AM: There are other key elements that have been added to the business this year in the form of the Incadea DMS system, which aims to take on CDK. How difficult will be to take on such a dominant rival?

Martin Forbes: It’s a challenge we have with Motors as it takes on clear market leader Auto Trader.

CDK wouldn’t allow us to integrate any of our products into their system and that’s something we had to overcome, so we decided to introduce Incadea, which is already live in 95 territories and 3,500 rooftops. It’s well proven.

What we want to be ultimately is not a DMS but a retail operating system.

Our goal is to have the DMS central part in Incadea, then our aftersales management system, Xtime, plugged in. We’ve got our specialist CRM and process management solution in CloseIt, that’s in there. You could plug-in Modix to offer leads along with what we’re doing with Motors.

You can plug in all these different aspects and what you do is create this seamless retail operating system. That has to be the holy grail for the dealer and that has to be ours, too.

However, if you don’t want that CRM system from us that’s fine, you plug in the system you want, but let’s create that end-to-end environment for the dealers because it’s not there at the moment. It’s too fragmented.

AM: Was Incadea designed from scratch by Cox Automotive?

Martin Forbes: No, we don’t actually own the platform. It’s a Microsoft Dynamic platform. All we do is put a skin on it and make it relevant for the automotive industry.

The beauty of it is that it’s a familiar system and on a daily basis Microsoft is keeping that platform updated.

AM: Cox Automotive brings together lots of different businesses under one name. How is that breadth of knowledge and influence being exploited?

Martin Forbes: Back in December we established our new Cox Automotive Data Solutions division now based in Euston, London.

That business does two things which I don’t think the dealers do very well. It’s all about understanding data and big data and gleaning those insights.

It should really make the industry and ancillary industries – insurance, banking, etc. – see us as the go-to place for data.

As part of all this we have launched Stock Insight. Auto Trader has i-Control, we have Stock Insight for dealers to understand their stock, pricing, inventory, buying and how they measure up against local rivals.

AM: Are you going to rival Cap and Glass’s with this new data?

Martin Forbes: We have a partnership with Cap and we don’t propose to create our own data valuation engines to suddenly compete with Cap.

It is a fundamental partner to all our products. We have said to Cap that we are partnering with them and we see that continuing having recently signed up another three-year contract.

AM: How is Motors.co.uk competing with Auto Trader and the fast-emerging rivals like the Car Gurus business?

Martin Forbes: Auto Trader has just over nine million unique users per month. Motors network is about five million, so we’re about 55% from a reach perspective of Auto Trader. If you look at stock, Auto Trader has around 460,000 and Motors has 360,000.

Car Gurus is tracking behind us but you can’t deny they’ve done a good job coming into the market.

They spend probably five or six times what we would per month to drive traffic, be it PPC or retargeting.

AM: Where is the real appeal of Motors.co.uk over its rivals?

Martin Forbes: The aim from an SEO perspective is to be right at the top of the rankings, but also to be most prevalent among the results further down.

I was up with Darren Edwards at Sytner and I showed him an example of if I went in and typed in BMW 1-Series Tamworth they’ve got one link on that page, Auto Trader’s got one link but we have eight.

What I mean by that is that Motors would be on that, you might have Parkers on there but the point being because you start with Motors you go from 10% to almost 90% SEO coverage, which is almost the holy grail.

Pricing is a really sensitive subject so what we have done is change our pricing platform. Auto Trader’s fees are high and dealers have started to make some noise about it. We’ve now created a thing called Lead Actions which is everything from a phone call, email to detailed page views. What we now focus on with our dealers is how many lead actions can we provide for the money you pay?

AM: Will Motors.co.uk move into new car sales and offer finance?

Martin Forbes: At some point you’d be foolish not to try to explore and dip your toe into that market.

It is on the radar but we don’t believe that we’re at that point where we would take our eye off the used car market.

If we did do new we may look at doing it in partnership with somebody rather than think that we can crack every nut.

In terms of finance, NextGear doesn’t have any plans as yet to do consumer credit. It’s very much a stocking solution and there’s no appetite for us to do that.

That goes against everything we try to do in being considered partners with the dealers.

On Motors we did a partnership with Zuto and got a bit of backlash from that.

What we’d rather do is push the dealer’s finance and forgo that cheque.

AM: What lessons do you still have to learn about the industry?

Martin Forbes: Alex Taylor is one of the most senior members of the Cox Automotive hierarchy (he’s executive vice-president and chief operating office of Cox Enterprises)and is part of the Cox family.

This is the richest family in Georgia, with all the trappings of that.

He wanted to find out about Uber. He could have got a top consultant and had a report drawn up. Instead, what he did was to sign up as an Uber driver and go out into Atlanta, picking people up. He wanted to understand the process for drivers, how Uber worked.

You can imagine people getting into his Tesla and he starts asking them about Uber, why they use it and what they thought of it.

You hear stories like that and it blows me away. I aspire to be that kind of leader.