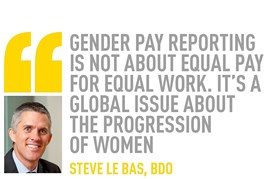 Franchised dealer groups and manufacturers’ national sales companies have until April 4 to begin displaying the differences in pay between male and female employees.

New gender pay reporting regulations oblige companies with more than 250 staff to report the figures annually, which over time will show whether businesses are making progress in enabling staff of any gender to further their careers and rewards equally.

Steve Le Bas, business assurance partner at BDO and a member of its motor retail team, said: “It is important to note that gender pay reporting is not about equal pay for equal work. It’s a global issue about the progression of women – that there are more men in senior roles and more women in junior roles.”

In motor retail, it is generally accepted that there is a gender imbalance across all levels. An AM-online poll in early 2017 found that two thirds of respondents had a workforce that was less than 30% female.

In recent years, a number of dealer groups have been active in considering how they can encourage women to consider a career in dealerships. The UK Automotive 30% Club was established in 2016 to work towards a goal of having women in 30% of key leadership positions by 2030. It believes 30% is the ‘tipping point’ at which the minority in a group gets a voice and begins to influence change. Members include Lookers, Jardine Motors Group, Toyota GB and Volkswagen Group UK.

Le Bas added: “In an industry dominated by men, it will be interesting to see the results in the reporting and how the industry fares against other industries in the UK.

“There are many reasons for gender pay gaps. The principal reasons can be described as the ‘motherhood penalty’ and are linked to taking maternity leave, career breaks, childcare and part-time work.”

The 250 employee test is per employing company or entity. It is not assessed on a group-wide basis. For groups of companies, it will be necessary to look at each group member individually to determine whether that entity has a reporting obligation, said BDO.

Groups covered by gender pay reporting legislation must analyse their data by reference to a “snapshot date” of April 5 each year and then report within 12 months of the snapshot date. The first snapshot date is April 5, 2017, with a reporting deadline of April 4, 2018.

Reporting must include the median salary – the value which half of salaries fall below and half above – and the mean salary, the total of all salaries for each gender divided by the number of employees. This is because highly paid senior people and board members don’t affect the median, but can increase the mean. By examining both, observers and analysts can identify where there is a lack of highly paid female employees.

Top 10 AM100 dealer group Arnold Clark Automobiles is one of the few motor retailers to have already published its gender pay gap report. Its workforce is 76% male, and the data shows that women’s hourly rate is lower than men’s by 14.6% (mean) and 10.8% (median).

In the publication, Eddie Hawthorne, Arnold Clark’s chief executive, said it aims to recruit more than 500 more women over the next three years, and it aims to create more flexible roles, operate a five-day working week for sales staff, and challenge gender stereotypes and

traditional perceptions. In the past four years, the number of women in its sales teams has doubled, and in aftersales has risen by 25%.

“Our business has more males at senior level and as such our average male salary is higher. This pay gap will continue to exist until we achieve a fair representation of men and women at all levels, which is something we are working hard to achieve,” states its report.

“Any evidence that employers are breaching the law can be investigated, and they risk being subject to enforcement by the Equality and Human Rights Commission,” the department said.

Download this free guide, which includes advice for employers on how to communicate the results to their employees and other key stakeholders.
www.bdo.co.uk/en-gb/insights/tax/human-capital/gender-pay-reporting-a-practical-guide.

Official information from ACAS and the Government Equalities Office
www.gov.uk/guidance/gender-pay-gap-reporting-overview