Train dealership staff to help those affected by anxiety or depression 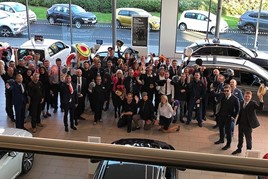 Automotive industry charity, Ben, has recorded an increase in mental health issues within the sector representing 52% of all enquiries for 2018/19 compared with 29% the previous year.

Ben’s 2018/19 Impact Report shows that people working in more than half of the businesses in the automotive industry (54%) are suffering from stress and nearly half (49%) are affected by anxiety.

Ben supported 433 individuals to access counselling or talking therapies last year and has seen a 74% increase in referrals to its mental health assessment service in a year (April-June 2019 versus April-June 2018).

Mental health issues are obviously not something isolated to automotive, with the CIPD (Chartered Institute of Personal Development) 2018 Health and Wellbeing Report showing that one in four people in the UK experience a mental health problem each year. But Ben’s report puts it into focus for dealer groups.

It was Ben’s second industry-wide survey, contacting 593 individuals and employers, including business leaders and HR professionals, asking about the issues impacting them.

Rachel Clift, Ben health and wellbeing director, said: “It appears that the rise in mental health issues within the automotive industry (particularly anxiety), is being influenced by political uncertainty, the pressure of advancing technology and welfare reform.

“It’s important to acknowledge individuals and employers who seek support at crisis point. We need to recognise and respond when people come to us at risk of, or affected by, self-harm or suicide.”

Clift said that the automotive industry has a high proportion of male employees and men are close to three times more likely to take their own life than women.

Ben offers its Critical Response Service to help those in the automotive industry support their employees. Through this service, the charity provides on-site trauma support which, to date, has seen it predominantly supporting employers and employees after a colleague has taken their own life.

Clift said: “This is a stark reality for us and the industry. With issues like this in mind, we have a responsibility. We look after our own – our automotive industry people. We’re here for anyone who works, or has worked, in the industry and their family dependents when life gets tough.”

All of Sinclair Group’s managers have been through Ben’s mental health training. This wasn’t mandatory, but Judith Sadler, Sinclair head of HR, told AM that managers volunteered to go through the sessions once they knew it was available.

Sadler noticed that some managers were being approached by staff on issues related to mental health which they didn’t feel properly equipped to deal with.

Managers attended training in groups of up to 12 over a period of three months and there were five sessions in total.

Sadler said: “Managers felt the training was something they needed and it’s been useful, offering them practical advice they can implement.

“By putting this training in place we’re putting the message out to those working at the group that this isn’t a taboo subject and managers are ready to help support you when you knock on their door.”

Sinclair has since been involved with fundraising with Hats on For Mental Health Day, where staff donate and come to work wearing a silly hat (pictured).

While the fundraising element was important, Sadler said seeing people at work wearing the hats was another great awareness raiser within the company to show how many people were ready and willing to help with mental health support.

Sadler is now seeking volunteers to become “wellness coaches” to help support staff with the right information if they’re feeling anxious or depressed.