Will the Government's Good Work plan be good news for car dealers? 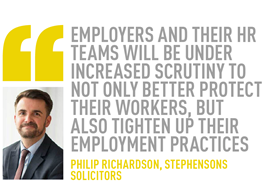 Dealers may need to review their employment practices on agency staff after the Government’s Good Work plan introduced more clarity on employment status and rights.

The new legislation was announced by the Business Secretary, Greg Clark, on December 17, introduced in reaction to last year’s Taylor Review of Modern Working Practices. Of the review’s 53 recommendations, 51 are proposed to be taken forward in April 2020.

Although many of the proposals remain under consultation, their impact could be substantial, particularly for dealers that employ agency staff or work with third-party suppliers for roles such as drivers, temporary technicians, valeters or
facilities management.

Some of the key proposals include bans on employers paying agency staff cheaper rates than permanent staff, more control for agency staff over how they work, the right to request a more stable contract and the right to get a written statement guaranteeing eligibility for sick and parental leave. Fines at employment tribunals have also been quadrupled – from £5,000 to £20,000 – “for employers that have shown malice, spite or gross oversight”.

Plans for a single enforcement body to help protect vulnerable workers have also been brought forward to early 2019.

Businesses are required to provide every agency worker with a document known as a “key facts page”.

This will need to include certain details, such as the type of contract they are employed under, the minimum rate of pay they will receive and details of any fees that may be taken.

A ban on zero-hour contracts was not part of the recommendations.

Clark said: “This is the largest upgrade in workers’ rights in over a generation and is a key part of building a labour market that continues to reward people for hard work, that celebrates good employers
and is boosting productivity and earning potential across the UK.”

Heath Evans, the chairman of the Association for Contract Valeting (ACV) and managing director of valeting business Assured Group, said the Good Work Plan had been introduced very quietly and many businesses were unaware of the proposals.

ACV members employ about 20,000 valeters across the UK automotive industry.

Evans said the most critical point in the document is that ‘control’ should be more of a factor around determining self-employment: “This will make it even more difficult for the industry to continue to defend self-employment, especially where the industry engages with valeting companies on a fixed-cost per day basis.

“The obvious other concern is closing the loophole around pay with the
Swedish derogation.”

Polly Davis, a legal adviser with
Lawgistics, said she has noted a difference in its employment enquiries due to high-profile employment tribunal cases involving the gig economy.

She said: “The Good Work Plan intends to bring forward legislation in relation to this, with additional mandatory content to the written statement upon commencement of the employment relationship and upfront clarity about status.

“We will be advising our members accordingly when the legislation is brought forward.”

Philip Richardson, partner and head of employment law at Stephensons Solicitors, said the announcement would hopefully give organisations with staff on zero-hour contracts more clarity about their rights: “For those people working in the gig economy, the Government’s Good Work Plan should, in theory, provide dealerships and their employees with some much-needed clarity.

“One of the clearest messages that comes from these reforms is that employers and their HR teams will be under increased scrutiny to not only better protect their workers, but also tighten up their employment practices.”

Richardson said most employers, including many car dealerships, have already made significant progress here.

However, he said those who have looked for a loophole will now find themselves facing “significant fines at a tribunal and potentially long-term reputational damage to their brand”.