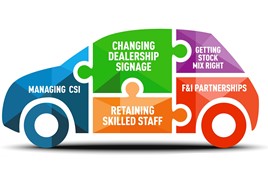 With new car registrations on the decline, franchised dealerships are increasingly turning to the used car market as a means of boosting their revenues.

The biggest challenges in setting up a non-franchised outlet include changing the dealership’s signage and branding, retaining skilled staff and getting the stock mix right. However, if done correctly, the rewards can be great – more control of your finances, stock and signage, and lower overheads without manufacturer extras such as demonstrators and courtesy cars.

“There may be lots of advantages in not having a manufacturer franchise,” said Guy Ainsley, director of franchised dealer development consultancy Front Foot Developments.

“Independent dealers can innovate far more quickly and in a way that suits their particular market.

“Non-productive costs can be reduced. Capital tied up in not-for-sale stock can be redeployed.”

So, what steps must a dealer take to de-franchise?

Firstly, the dealer must serve a notice period, typically of two years, Ainsley said. Next, it’s imperative that they tell their employees as soon as they have made the decision, so that they know exactly where they stand, as well as their banks, other funders, accountants and auditors, he added.

A major change, Ainsley said, is in their signage, including removal of manufacturer logos and totem. That extends to an overhaul of their websites and marketing systems as well, he said.

“The dealer needs to plan to replace the signage with something that is neat and fits in, but avoid trying to pretend the dealer is still a franchised business,” he said.

“There is nothing to stop the dealer saying ‘independent ’ in advertising as long as they do not use the manufacturer font or logo.”

Another key area, Ainsley said, is in the evaluation of a dealership management system (DMS) for that particular site as the dealership migrates from a manufacturer-led system to its own. By doing so, a dealer can strip out any unnecessary parts and end up with a system tailored to its needs, he said.

“The dealership should stand back and do an audit of all the systems it uses and decide what it really needs,” he said.

“This is likely to be cleaner and simpler than their current systems, and cost a lot less.”

“An independent dealership has to have some way of reliably managing and controlling its own CSI and it can’t just rely upon  the likes on Facebook – that’s not robust enough,” he said. “So management needs to implement a process for keeping on top of quality of service and prospect business without the manufacturer’s customer satisfaction scores.”

On top of that, the dealer needs to get their F&I partners lined up for that particular operation, said Ainsley. That also applies to replacing other strategic suppliers that may be tied to manufacturers, such as oil and tyre suppliers.

“Make sure the cost of finance is right, and the type of underwriting suits the anticipated customer base,” he said. “If used vehicle stocking is currently supported by the manufacturer’s finance company, what replacement facility is needed?”

Then there is the staff to consider. That includes making sure all bonuses, particularly ad hoc ones, are well documented and the process of settling up is agreed before the termination date.

In terms of stock, the dealer needs to unwind demonstrators and any courtesy cars, used vehicles on sale or return, parts vans or other not-for-sale stock, said Ainsley. It must have a stock profile that either suits its local market or that of the previous franchise, or else it needs to specialise.

“This needs research and will change over time. Being allows the dealer to be far more entrepreneurial, which is great as long as they are disciplined at the same time.”

For many, the appeal lies in retailing trade-ins that do not suit a franchised forecourt, and in escaping manufacturer standards for stock mix and minimum stocking requirements.

Ainsley said a dealership would also need to tie up any loose ends, such as settling outstanding warranty claims, returning parts and concluding any audits.

Finally, the dealership must decide whether to retain its authorised repairer status. If so, it needs to have a clear understanding of the standards required to be a standalone operation and to have the resources to do it properly.

Steve Burrows, the managing director of Burrows Motor Company, bought the Grant & McAllin MG and SsangYong showroom near Sheffield last year and turned it into Mint Cars, a non-franchised used car operation. He said the biggest challenge was getting the stock mix right.

“You need to look at what you should do with your stock profile from both a local market and an online perspective,” he said. “When we took over the site a year ago, we wanted to maintain the high standards of the previous owners, who were well recognised in the area, at the same time as getting our own name across.”

David Bilsborough, the owner of Cheshire Cars and a founder member of the Independent Motor Dealers Association, said a dealer moving to non-franchised operation will also need to reduce head count.

Without manufacturer support, a dealer must also step up its  marketing and public relations efforts to ensure that its messaging is consistent and timely, he said.

“There’s lots of thing you need to do in terms of PR and marketing both within the company and outside of it. That includes managing your social media properly.”

Professor Jim Saker, director of the Centre for Automotive Management at Loughborough University’s Business School, said the biggest change required is a shift in mindset.

“It can take a while to come round to this way of thinking, particularly if you have been operating as a franchise before,” he said.

“But ultimately it means that you are no longer restricted by franchise requirements, so you draw up your own rules, giving you greater flexibility and the ability to reduce your overheads previously spent on selling a manufacturer’s car.” ALEX WRIGHT