The UK’s 50 largest independent car dealers generated more than half a billion pounds of extra car sales between them over the past 12 months.

Four out of five ID50 dealers have grown their businesses year-on-year, a sign of the continued strength of the used car market and the appetite of independent dealers to increase stock holdings and sales.

The number of independent dealers with sales exceeding £100 million has risen from nine to 11, fuelled by strength in used car values, strong sales volumes and property expansion. And the threshold to the ID50 has risen by £2.5m – it’s now £20.7m, with Anchor Cars and Vans slipping down into 50th position, its sales decline attributed to pulling back from unprofitable business and a broadening of its stock profile, typically nearly new to seven-year-old light commercial vehicles and cars.

Profitability has strengthened. Last year, the median return on sales had dropped 0.3ppts to 2.2%, but this time it has recovered to 2.5%. The mean RoS is now 3.3%, compared with 3.1% last year.

Car supermarket networks are leading the sector in terms of revenue – only two of the 10 largest ID50 companies this time are classic car or supercar dealers. Both are specialist marketplaces that have gone slightly off the boil, as growth in values has stalled except for the finest examples.

Market leader Motorpoint has extended its lead over the second-placed independent dealer, Car Giant, as its revenues increased by 21%, or £175m, year-on-year while Car Giant’s sales declined by 5%, or £31m. 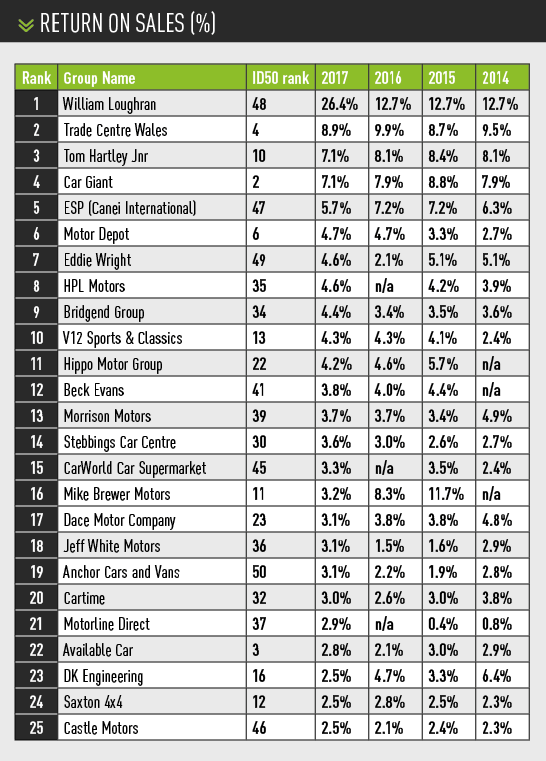 Motorpoint’s growth is largely due to the opening of its 12th dealership in Sheffield and previous additions Castleford, Oldbury and Birtley getting up to speed. Vehicle stocks across the group averaged above 6,700 units over the year, with the emphasis on nearly-new cars. It has extended its stock funding facility with Black Horse by £10m, to £75m, and secured a further £20m facility with Lombard. Motorpoint will open a dedicated vehicle preparation centre on a 10-acre property at Peterborough this spring, to free capacity at its retail sites.

Chief executive Mark Carpenter said the strategy of delivering choice, value and service to all customers continues to be Motorpoint’s core focus. The business uses Net Promoter Score as a measure of satisfaction, and it has a 77% score. Repeat business is increasing, up from one in four of its car sales to nearly one in three. Carpenter said: “This is the most objective and reliable indication of ongoing customer satisfaction, and gives us great confidence in the relevance of our proposition.”

At Car Giant, plans to relocate the 46-acre business remain in limbo after a local regeneration organisation withdrew its support for the West London-based company’s scheme and launched its own. The plan would have funded the car supermarket’s relocation and led to the creation of housing, transport links and amenities across its current Old Oak Common site. Tony Mendes, Car Giant’s managing director, said the company had spent four years and £8.5m on the plan, and is prepared to put up a fight if the regeneration organisation attempts a compulsory purchase order that affects the 40-year old business, which serves car buyers until 10pm each evening.

Available Car increased its turnover by £22m since the last ID50, together with a 40% uplift in pre-tax profit, both consequences of a four-year expansion plan at the family business. During that period, it has added a fourth site in Leeds and expanded the property further, invested in management training, succession programmes and apprenticeships, and developed online services such as ‘Click & Collect’ car reservations. A profit share programme ensures all staff are rewarded for their part in the group’s success – the payout in 2017 equated to 16.25% extra annual salary.

“We continue to improve our stock control and the selection of cars available, with the focus on affordable, newer used models,” said operations director Paul Arscott.

Stock retailed is typically in the £4,000-£24,000 price bracket, and unlike some car supermarkets, Available Car charges no additional administration fee.

“With strong growth prospects, we have the opportunity to claim position as a market leader,” Arscott added.

This year’s ID50 shows that Trade Centre Wales is now one to watch. Investment in the car supermarket group has enabled it to grow rapidly since 2015, becoming the UK’s fourth largest independent dealer, with a 68% year-on-year rise in turnover. Growth is not coming at the expense of profitability – its pre-tax profit climbed by 50% too.

From its heartland north of Cardiff, the company has expanded into mid-England since 2017, opening major car supermarkets in Wednesbury and Coventry – the latter capable of displaying more than 1,000 cars. Established sites are growing organically too, and total sales volume has risen by 62% in a year to 30,947 units. With the Coventry dealership only a year old, chairman Mark Bailey and chief executive Andy Coulthurst expect to report more increases in sales in the years ahead.

Unlike many rivals, Trade Centre Wales prioritises its website content in favour of consumer finance checks and price promises, rather than allowing prospective buyers to find information about the cars in stock. However, it markets some stock on classified websites, and promotes its brand through local marketing and sponsorships.

Chief executive Peter Waddell praised the abilities of his staff, who have regular meetings with the directors to understand the company’s objectives and performance and to share ideas. He said in its accounts that due to its “strong purchasing power at auctions”, through its nationwide team of buyers, “the business is able to provide competitively priced used motor vehicles”. He added that it is advertising “heavily but effectively” to raise customer awareness and to reach buyers further afield.

Motor Depot continues to rise up the ranks, taking sixth position this time. Its turnover has almost doubled in two years, and its pre-tax profit has almost trebled in the same time. The used car retailer based in Hessle, near Hull, followed up last July’s opening of its eighth retail site in Barnsley with two more opening a few months later, in Stoke-On-Trent and Sheffield. At Sheffield, the outlet stocks more than 300 cars within minutes’ drive of sites run by rivals
Motorpoint and The Car People.

Motor Depot, whose workforce now exceeds 200 people, has also centralised vehicle preparation, with the opening of a four-acre PDI centre in Goole, Yorkshire.

The final operation with nine-figure revenues this year is Mike Brewer Motors, the used car retail arm of Evolution Funding. Now with dealerships in Luton and
Sheffield, the company demonstrates the rewards of diversification, as it is heavily engaged in leasing and finance brokering through more than 3,000 different dealer forecourts, plus vehicle subscription services operated under the brand EvoGo. Revenue climbed 66% in a year to £101m, however its pre-tax profits fell 35% to £2.7m.

A notable absentee from the top 10 for the first time is JD Classics in Essex. Ranked fifth last time and then the UK’s largest rare and historic car dealer, it endured a court battle between a customer and its then boss Derek Hood, went into administration last summer and was rescued by HPS Investment Partners through a new company, Woodham Mortimer. The deal saved about 60 jobs at its Maldon headquarters, and Jean-Marc Gales, who briefly served as JD Classics’ chief executive just before the administration, now heads Woodham Mortimer.

Given the business disruption, and  the fact that Woodham Mortimer is yet to file accounts, our ID50 analyst has estimated the turnover of the resurrected business at £80m, a drop of 42% from JD Classic’s recent peak. It leaves the business on a par with rivals.

Knaresborough-based prestige and performance car dealer Redline Specialist Cars is one of many used supercar dealers to record growth in sales. In Redline’s case, it credits an increased stocking loan facility and extra sales staff in helping it increase annual revenue by 32%, or almost £22m, as it was able to stock higher-value vehicles. Pre-tax profits dropped by 41% to £449,466, however.

The figures for Romans International, the supercar dealer in Banstead, Surrey, paint a similar picture. Its turnover grew by £20m to £90m, but pre-tax profits fell 19% to £1.6m. And DK Engineering’s profits dropped 22% to £2.1m, despite increasing turnover by 45% to £84.5m. It said it has increased its sales and parts staff, appointed a director of finance and invested in additional capacity to store client’s precious vehicles.

Stock turn, in the absence of a detailed breakdown, is calculated using stock and cost of sales from the statutory accounts. While this may mean a loss of some degree of precision, the basis is consistently applied and non-stock related items in cost of sales should not be material.

Profit per staff member is calculated using profit before interest and tax (PBIT) since finance cost does not relate directly to the activities of individual staff members.