Like and RT: how independent dealers can win at social media 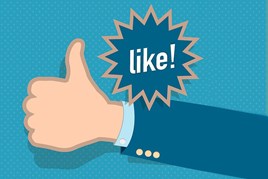 The UK is addicted to social media, lagging behind only Singapore, Hong Kong and Australia in per capita activity.

According to media agency Wearesocial, 59% of the UK population have active social media accounts (38 million). The average for Western Europe is 46%. The global average is 29%. On average, every person in the UK spends more than two hours a day on social media.

So how do independent dealers take advantage of such high levels of activity?

For Jamie Caple, co-owner of Caralot and the company’s “creative director”, the key is offering a unique voice.

Caple started the company with business partner and co-owner Nick Donald five years ago after leaving their position running a franchised Mercedes-Benz business and their social media accounts reflect their own personalities.

The business’s website is built around a comic-book style theme and the dealership has created comic-book personas for each member of staff. They use their interests –

American pro-wrestling, boxing and cars – to talk with customers and keep things fun, even tweeting under the name @CaptainCaralot.

Caple said: “We use social media as a justification tool. We need to prove to people visiting our website or people that find us online that we’re the sort of business they want to come to.

“Lots of dealers use Facebook very badly. It requires time, you’ve got to put the effort in. We generate leads through it, it helps us get good feedback from customers.

“Advertising in the automotive industry is expensive and Facebook was a great, free way, at the start, to promote the business and tell people what we were doing.”

Caple said a good test for a social media account is how recently content has been posted. If it has been more than a week, “the business doesn’t care enough about it”. 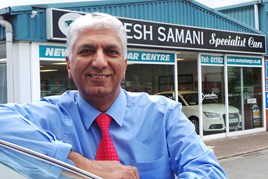 Like many dealers, Umesh Samani, owner of Specialist Cars in Stoke-on-Trent, said he wasn’t interested when he first heard of Facebook or Twitter, believing they were the domain of teenagers with too much time on their hands.

It wasn’t until Samani was building the website for the business that his web developer asked him to rethink his mindset.

“He signed me up for the accounts and I’ve been using it ever since,” he said.

Lauren Watson, Imperial Car Supermarket social co-ordinator, has worked in sales for more than eight years, but has been working on social media for the past two.

Imperial previously outsourced management of its

Facebook page to a third-party supplier, but Watson said that wasn’t working.

“I was monitoring what they were doing and it wasn’t specific enough to what we wanted and I knew I could do a better job myself so we took it in-house.”

Her role is dedicated to speaking with customers on social media, replying to queries, from finance quotes to stock checks. She also monitors trends, reporting them back to management, as well as managing how advertising budgets are spent on platforms like Facebook.

Building a following from scratch

Staring with a like or follower count of zero may be a bit daunting, but building up an audience of customers takes a bit of patience, planning and some engaging content.

To pull in its first customers, Caralot decided to run a competition.

Caple said: “We got the ball rolling by giving away a holiday to reach 500 likes.” This worked so well that Caralot started putting higher targets in place with cars as the prize.

“Social media has to be a two-way conversation… the biggest mistake you can make is to just be broadcasting” Umesh Samani, Specialist Cars

The business has given away a Ford Capri, Mitsubishi Evo and Mazda MX-5 and is now looking to giveaway a Mercedes-Benz G-Wagon. Caple is hoping the G-Wagon will take the business from 63,000 to 80,000 likes on Facebook. The business also has more than 32,000 followers on Twitter.

“Having that amount of followers is helpful to the business and to other customers that come across the social channels, it provides ‘social proof’ that the business is engaging with its audience and interacting,” he said.

Caple calculated that each like on Facebook costs the business about 30p. This determines the budget to give away a car.

“We involved users in building the car too, asking them questions to decide what colour it should be, whether we should keep the stickers or change the interior.”

Caple acknowledges that he has no grand plan for content: “We just make content that we would want to see that makes us laugh. 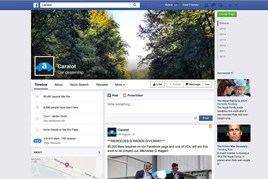 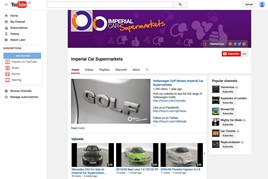 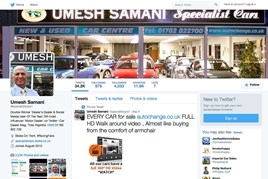 “What makes it successful is we focus on what makes us unique as a team and we run with that. Be you and get your personality across, that’s what social media is great for.”

For Samani, there are no hard and fast rules about how he uses social channels.

“If something comes to mind, I just use my phone and type it out,” he said.

He will post pictures of stock occasionally, particularly if he’s got something special that will generate interest from followers, but the key is to make sure there’s a good balance between non-car related content and not forgetting that the business needs pushing in a subtle way, too.

Watson makes sure the key messages Imperial wants to communicate are scheduled throughout the day using the Hootsuite tool for Twitter. This leaves her free to add content as it comes to her, as well as interacting with customers.

Imperial also runs “guess the car” competitions. This includes taking an image of part of a car in stock and getting customers to guess the make and model.

Control of the social media accounts is limited to four people at Caralot. If someone has something to post, it is sent to a group text chat, which everyone has access to. One of the administrators can then pick it up, edit it and post it.

Samani does not use specific programmes to track his success on social media, instead relying on Facebook’s own admin tools and notifications on his smartphone.

“I’m a one-man band,” he said. “It also doesn’t take up a huge amount of time and I’ll do a tweet or be responding to someone in between whatever else I’m doing during my normal day.”

“Social media has to be a two-way conversation and I think the biggest mistake you can make is to just be broadcasting,” he said.

Samani said it surprised him how much traffic Facebook and Twitter send to his main website. He tracks this through Google Analytics using the free tools and through another tool which came with the live chat programme he uses, Zopim.

Imperial wants to get more people involved across the business and may introduce KPIs surrounding referrals via social media.

Watson said: “I’m trying to encourage people throughout the business to make sure customers review them on social media, on Facebook or Google. We want those good experiences shared around as much as possible.”

How to measure return on investment

Return on investment can be one of the sticking points for businesses that may be more sceptical of ploughing effort and money into social media.

While dealers interviewed for this feature said they have sold cars directly through social media platforms, they acknowledge that it is not their main motivation.

Caple said: “Facebook or Twitter only really account for one or two sales a month directly, but the job of the social media channels is to reach customers, talk to them and build trust.”

Samani said social media can’t be viewed as a pure advertising platform for stock, that is the job of a dealer’s website.

Samani said: “I still have friends in the trade that are very sceptical and they think I’m wasting my time on the phone when I should be selling.

“But it’s all part of getting my name out there, building a brand and rapport with customers. I use it to communicate with customers and businesses.” 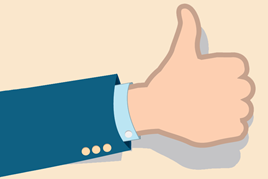 According to Ofcom’s Adults’ Media Use and Attitudes report 2015, Facebook remains the default social networking site for almost all UK adults who are online, at an astonishing 97%. By comparison, Twitter takes a 26% share.

Although 16- to 24-year-olds have always had higher social media usage levels than older age groups, the most marked increase over time has been among the 35-44 age range – a key car-buying demographic and a 68 percentage point increase from 12% to 80%.