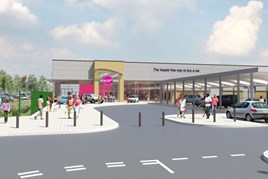 Work is underway to develop a fourth site for car supermarket The Car People, with recruitment set to start later this month.

Cosnstruction of the £6m facility at Winwick, near Warrington, is expected to be completed next spring as the used car retailer – interviewed in the last edition of Independent Dealer magazine – continues its “aggressive period of growth”.

Speaking to AM yesterday, the Car People’s sales director, Jonathan Allbones, confirmed: “Construction of Warrington starts today. We appointed Wakefield-based Caddick Construction to build the site for us. Trading is good and the Wakefield building work is in full swing.

Allbones said that The Car People had also launched a new website last week, adding: “We don't like to stand still.”

Development of the new Warrington site comes 16 years after The Car People was first established with aspirations of operating through six sites by the end of 2005 and retailing 5,000 cars in its first year, gradually growing to 10,000.

Currently the business has three sites – in Wakefield, Manchester and Sheffield – however, and sold about 17,500 car last year alone, with its existing facilities almost reaching capacity.

Allbones said: “We're starting recruitment later next month, with the site General Manager to recruit first, we like them with us for a few months before the site is operational.”