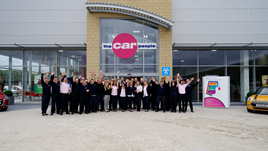 The Car People has officially opened its new £13 million car supermarket site in Warrington, targeting 4,000 sales in its first year of trading.

A 42,000-square foot showroom is the centerpiece of the 13-acre site which has the capacity to display over 900 top quality used cars, with additional capacity for the preparation of 600 cars and a 200-space customer car park.

Jonathan Allbones, sales director for The Car People’s four-site operation, said: “Our Warrington branch is now open for business; we’re expecting to sell 4,000 vehicles in our first year of trading, with a view to increasing to volumes that are similar to our Wakefield site, which is currently 8,000 cars per annum.

“We plan to recruit continually to build the team to deliver anticipated volumes in line with the high levels of customer service we’ve become known for over the 17 years since we launched our very first site at Wakefield.”

Paul Bullas, general manager at The Car People Warrington, said: “95% of our team to date lives in the immediate area. It’s of the utmost importance to us that we bring nothing but benefits to the locality, which is why we’ve considered everything, from working with the Warrington Council and Warrington Collegiate to ensure we have a strong, local team who are passionate and knowledgeable about the area and its community, to taking care to maintain a brook that passes through our site, including the development of a bespoke pond for local wildlife.”

Based in the Winwick Quay area, the site was selected as part of a nine-year, extensive research process to secure an exact spot that was easily accessible for surrounding areas and large enough to accommodate the brand’s super-sized plans.

With proximity to several motorways, the site features the largest preparation area of all The Car People’s four showrooms – in Wakefield, Sheffield, Stockport and Warrington – which means more cars, plus increased space to perform the brand’s aftersales operation.

The handover area is also larger than usual, so customers can enjoy an unhurried, thorough & hassle-free experience when collecting their car.

Gross profit for the same period was £10.6 million, up on £9.8 million during the previous 12 months.