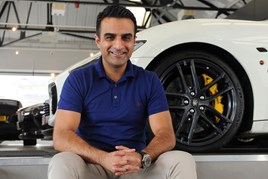 Shak’s Specialist Cars (SSC) in Hudderfield has been named Business of the Year at the 2018 British Muslim Awards.

The independent dealer has been trading since 2004 and currently occupies a showroom with a capacity for 60 vehicles.

SSC stocks a range of prestige and performance cars with more than 100 vehicles listed for sale.

Shakeel Shah owns the company and has aspirations to grow the business even further with the acquisition of a second stocking facility.

Winners for the sixth annual British Muslim Awards, presented by Al Rayan Bank, were announced at a black-tie ceremony on January 31 2018, at the Bradford Hotel in central Bradford.

The awards ceremony aims to recognise various achievements from the entire British Muslim community in all aspects of society including business, charity, sport, arts and culture.

For more information about Shah and SSC click here to read our interview in Independent Dealer.

How Shak’s Specialist Cars plans to enter the premier league

How Shak’s Specialist Cars plans to enter the premier league