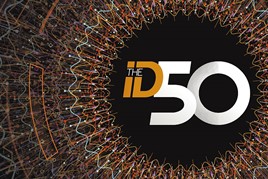 The aggregated sales of the UK’s top 50 independent used car dealers have surpassed the £4billion mark. The ID50 grew revenues by almost £350 million above last year’s results. That is despite the exit of The Car People, which ranked fourth last year, but is no longer independent since its takeover by franchised dealer group Sytner last December. Big Cars, which had risen quickly to 37th place in the 2017 ID50, with £25m turnover, ceased trading in January after cashflow and financing issues. It went into administration on February 2, owing HSBC Bank about £1.5m, according to the administrator, Grant Thornton.

Motorpoint continues to lead, and looks likely to do so in the long term unless its London-centric runner-up, CarGiant, decides to acquire one or two of the rivals further down. Such an expansion seems unlikely, given that CarGiant has thrived in the capital and it still awaits a relocation within West London for its owners to benefit from a vast redevelopment in the Old Oak Common and Park Royal areas.

Motorpoint grew revenues by 13% to £822m according to its 2016 accounts, benefitting from expansion into Castleford and Oldbury, which took its network of dealerships to 11 locations. Since then, it has opened its 12th, in Sheffield. The group is considering a 13th site in 2018, and said it has a pipeline of potential options under review. Its aim is to bring the majority of the UK’s population within 30 minutes’ driving time of its dealerships. 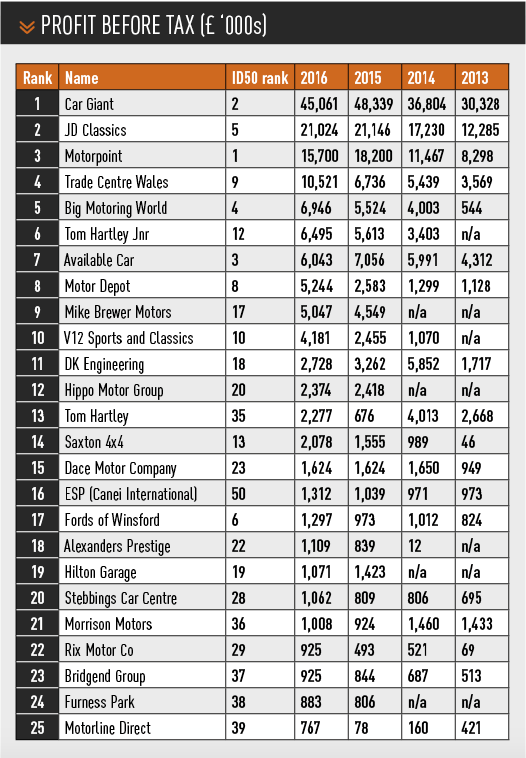 Staff morale and career progression are pillars of Motorpoint’s growth strategy. Its scale allows it to run its own talent management programme, designed to identify and develop staff members with senior management potential. Of the 38 people who have already  been through the programme, 22 have been promoted to new positions, and as the group expands further it benefits from a pool of experienced leaders able to step up.

Data is a third pillar, and Motorpoint has invested in enhancing its stock, marketing and customer relationship management. The 2016 new car market, heavily pushed by manufacturers, brought benefits to the company, which sources a significant proportion of its 5,000+ cars stocked from fleet and rental operators. It said its stock profile has gradually increased the mix of premium brand models, in line with market demand.

CarGiant, which boasts of displaying about 2,300 cars at its single site, grew revenues by 3.2%, barely ahead of inflation, and its profits dropped. However, at £45m before tax, it has by far the highest earnings of any independent dealer in the UK, and its net assets surpass £213m. Its headcount increased by 10% to 826 staff in 2016, adding £2.8m in staff costs, and it puts great focus on training many in multi-skilled roles to provide flexibility for the business. One result, CarGiant says, is better customer service – its internal online surveys show an average rating rising from 8.26 to 8.34/10.

Its accounts show it ended its stock-funding partnership with Black Horse and entered into a new £50m borrowing facility with Lombard, part of RBS. Separately, new banking facilities up to £175m were agreed with Lloyds Bank and two other partners in a syndicate, to finance property acquisitions. 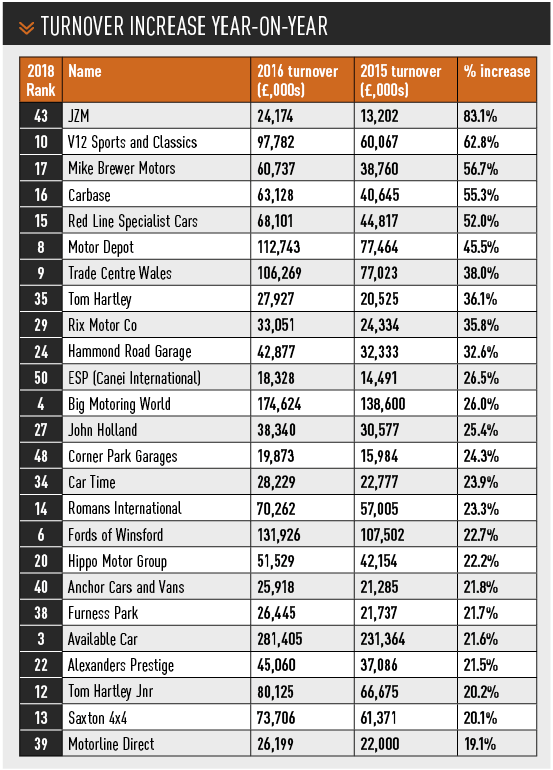 Available Car, with four sites in the Midlands and West Yorkshire, grew revenues by £50m (21.6%) year-on-year as its 10-acre Leeds branch, acquired after Carcraft’s collapse in 2015, had its first complete year of trading. The group has bought more land to expand that branch to 14 acres, with an ambition to increase its capacity from 1,500 to 2,500 cars and double the workforce. It will make the Leeds outlet Available Car’s largest, exceeding even the original 12.5-acre site opened in 2002 at Castle Donington, which remains the head office. Operations director Paul Arscott said the Leeds site is a “three- to four-year project for growth” and it has had “considerable success”. He wants Available Car to deliver the best online used car showroom with a world-class customer experience, and said increasing stock capacity is the principal enabler to increase sales, revenues and net profits.

Pre-tax profits at Available Car dropped £1m (14%) to £6m, but it said if the Leeds site’s start-up costs were stripped out, it would have recorded an 18% increase to £8.3m. Headcount rose by 114, to 709, at the group, which operates a profit-share scheme for all staff.

With The Car People taken out of the ID50, Kent-based Big Motoring World became the UK’s fourth largest independent dealer. Its turnover rose 26% annually to £175m, and its pre-tax profits neared £7m, also a 26% increase. Sales have risen rapidly at its West Malling BMW and Mercedes-Benz specialist site and its sister Canterbury Motoring World car supermarkets, and turnover will increase further after the opening, in spring 2018, of its fourth branch, at Blue Bell Hill, which specialises in used Audi and Volkswagen and has capacity for 3,000 cars. In the past three years, Peter Waddell,  the chief executive, has bolstered his management team with marketing director Darren Miller, formerly of CarGiant, and sales director Paul Whitaker, ex- Black Horse.

Pre-tax profits were broadly flat for JD Classics, at £21m, maintaining its runner-up place behind CarGiant for annual earnings.

Turnover increased by 13.8%, to £138.6m, ensuring it remains the highest-placed niche classic and supercar dealer, and keeping it on the tails of Big Motoring World, as sales of its luxury historic and race cars held up well. The result was a 2.2ppt drop in return on sales, yet at 15.2% those returns are still streets ahead of all others in the ID50 – there’s good money to be made at the highest end of the market, it seems.

Back in car supermarket land, Fords of Winsford grew sales by 23% to almost £132m, while its pre-tax profits increased by 33% to a record £1.3m. The Cheshire-based company attributed much of the growth to a first full year of trading at its second site, which opened in 2015 opposite the Trafford Centre in Manchester.

Imperial Cars of Swanwick, the seventh-largest independent dealer, is certain to leapfrog Fords and climb the rankings in future ID50 editions. Its accounts for 2016/17 show it rebounded back into the black, with £700,000 pre-tax profit, after a loss in 2015/16 when it expanded into Northampton and Chertsey from its south of England heartland. As that business bedded in and it focused on profitability, the group’s turnover continued to climb organically, by 8.6% to £116.6m. Mike Bell, Imperial’s managing director and Neil Smith, operations director have opened more sites since, at Ipswich, Exeter and Halesowen, and are about to launch their first branch in Scotland, at Grangemouth.

As we predicted in last year’s ID50 supplement, Motor Depot has become a new entrant into the top 10, rising from 11th to 8th place. Its turnover now stands at £112.7m, three times the figure it achieved three years previously, thanks to expansion into Birmingham and Grimsby. Managing director Steve Butterley has added more sites in Worksop and Newcastle in the past 12 months, as the group expands from its Yorkshire foundations.

Trade Centre Wales is another group rising rapidly, reaching 9th place in the ID50 after a 38% increase in turnover, to £106.3m. Growth was a combination of increasing sales at its two existing sites and expansion to the outskirts of Cardiff in mid-2016, with sales volumes nearing 20,000 units. Under chief executive Andy Coulthurst and chairman Mike Bailey, the chain has grown again in 2017, opening its first site outside of Wales, at Wednesbury in the West Midlands. That site is branded Trade Centre UK, and that brand opened a fifth outlet at Coventry in May, with 1,000 cars on site including 400 under cover.

Closing the top 10 of the ID50 is V12 Sports and Classics, which has risen 10 places in two years by more than doubling its turnover to almost £98m, which was 63% up on the prior period.

From its sole showroom in Hinckley, Leicestershire, which retailed about 500 cars per month, the business expanded in summer 2016 into a second outlet at Stoke-on-Trent and again during the winter into Wolverhampton. Both were acquisitions of well established businesses that had been family-owned previously.

Director Farhad Tailor said it was “a year of exceptional growth”, but the company continued to monitor and control costs. Pre-tax profits rose 70% to £4.2m and headcount has reached 142 staff.

Tailor’s ambition is for a group stock of more than 1,500 units a month, which “will make the company ready for the next strategic stage of its development”. Tailor said V12’s core values include high stock turn, flexibility and cost control.

Two classic and sports car specialists dropped out of the top 10 in this year’s ID50. DK Engineering ranked ninth last time, but fell to 18th this year, as its turnover fell 39% to £58.1m, its lowest result in four years. The drop was largely due to vehicle sales declining, but its income from vehicle storage rose 25% to £244,551. With £2.7m in pre-tax earnings, DK Engineering improved its profitability, with return on sales rising by 1.4ppts to 4.7%.

GC Motors, the Harrogate-based prestige and supercar dealer, grew revenues by almost 10% to £88.6m through higher monthly sales volumes thanks to reworking its facilities and forecourt space to carry more stock, but it wasn’t enough to retain 10th place while its closest rivals were growing through expansion and acquisitions.

After recording £345,000 pre-tax profit, less than half of what it generated the previous year, return on sales dropped by 0.5ppts to 0.4% at the business, which promises it won’t be beaten on price for like-for-like cars. Its average workforce dropped from 96 to 55 people year-on-year.

Tom Hartley, the supercar specialist, increased its pre-tax profits by 237%, to £2.3m.

Tom Hartley Jnr, the business headed by his son, remains top of the profit-per-employee table for the third year running, at £811,875 earned for every staff member.

Stock turn, in the absence of a detailed breakdown, is calculated using stock and cost of sales from the statutory accounts. While this may mean a loss of some degree of precision, the basis is consistently applied and non-stock related items in cost of sales should not be material.

Profit per staff member is calculated using profit before interest and tax (PBIT) since finance cost does not relate directly to the activities of individual staff members.