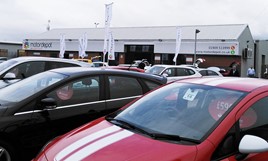 The Motor Depot used car supermarket group has reported a 32% rise in turnover and a 31.5% increase in pre-tax profit in its annual results to August 31,2017.

The East Yorkshire-based independent used car retail group was established in 2003 and, in 2017, added a new showroom in Worksop to a portfolio now featuring sites in Barnsley, Birmingham, Grimsby, Hessle, Hull, Newcastle, Scunthorpe and Worksop.

Insider media reported that the directors had stated: "The company continues to trade profitably in the very competitive motor trade. The directors consider the results for the year to be good, they expect trade to continue to grow with the expansion of the company."

Following its financial year-end, Motor Depot continued to expand with the opening of two further dealerships on the Vroom Car Retail Park in North Shields and on the Gateway 36 development in Barnsley.

It's site in Hull has also undergone a refurbishment.

Its annual statement said: "The company continues to review its activities to improve its competitiveness in the motor industry.

“The directors are confident that the company's performance will allow it to seize opportunities for growth over the next five years."