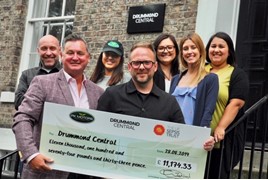 Independent used car retailer PK Motors has raised more than £17,000 for the Sepsis UK Trust in memory of family friend Jess McEnroe, who died from the condition aged just 26.

The Newcastle-based retailer handed its latest donation of £11,174 to the charity after hosting a golf day held at Matfen Hall golf course, in Northumberland, which was attended by local members of the motor trade, businesses and customers.

PK Motors’ efforts will be added to the £50,000 fund raising campaign which was set up by Newcastle-based advertising and marketing business Drummond Central in memory of their work colleague Jess, who died suddenly of sepsis in 2017, aged just 26-years-old.

The owner of PK Motors, Paul Keighley, whose daughter was a friend a colleague of Jess, said: "We are all delighted to support this amazing fund raising campaign set up in memory of Jess.

"Sepsis is a terrible illness and can strike at any time. It's truly inspirational that we had so many businesses and customers taking part in the golf day and contributing their hard earned money to this worthwhile cause.

"We all had a fabulous day’s golf and I wish to thank everyone that took part, contributed to my Just Giving page and helped to organise the day."

Drummond Central managing director, Dan Appleby, said: "Over the last two years we’ve done everything we can as a team and as a business to hit our target of raising £50k for The UK Sepsis Trust to honour our friend and colleague Jess.

"But we wouldn't have been able to achieve this without the help from Paul and the team at PK Motors.

“What they’ve contributed to the cause is beyond anything we had imagined and everyone at Drummond Central is so grateful for their continued support, enthusiasm and love.

"There’s just no way we could have done this without them. It’s been an incredibly emotional, sometimes difficult time, but we’re delighted to have raised so much for The UK Sepsis Trust and we know that Jess would be proud of us all."

The total figure raised was boosted by a raffle and auction at the golf day and Keighley's personal Just Giving page.

For information on how to contribute to Drummond Central's £50,000 fund raising campaign please visit https://www.justgiving.com/fundraising/for-our-jess

What Car? to tour dealerships and raise money for Ben charity

What Car? to tour dealerships and raise money for Ben charity