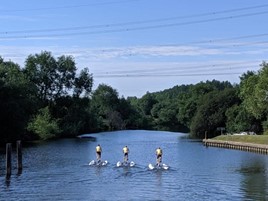 Automotive industry leaders from Group 1 Automotive, Allianz Partners and Volvo have succeeded in raising over £202,000 by cycling 171 miles on the River Thames.

Darren Guiver, managing director of Group 1 Automotive; Tim Tozer, chief executive of Allianz Partners UK & Ireland and Jon Wakefield, who heads up Volvo’s Swedish national sales company took to the saddle of ingenious waterbikes to cover a large part of the route – spending 12 hours a day in the saddle.

The event took place from July 4 to July 7 and saw supporters line part of the route to cheer the pedal-pushing trio on in their efforts.

Over £202,000 in sponsorship has been collected for the Ben charity as a result of their efforts, and the total is still rising towards the challenge’s target of £300,000.

In 2016 Marshall Motor Group's chief executive, Daksh Gupta, literally rose to the challenge of the first Ben Industry Leaders Challenge and conquered his fear of heights to raise £142,000 with a chairty skydive.

A year later Lookers Group raised over £215,000 with its Electric Charge fund-raiser, driving across the UK using only electric and hybrid cars and visiting all 155 of the group’s dealerships, from Charles Hurst in Dublin in May to its final stop at Mercedes-Benz of Eastbourne.

Commenting on the success of the latest Industry Leaders Challenge, Tozer said: “This was such an incredible challenge – I’m so pleased I was part of it. It really was extremely epic and we’re all exhausted now, but it was worth every moment in the saddle.

“We saw some incredible sights, tested ourselves physically and mentally and, most importantly, raised money for our automotive industry charity.

“A heartfelt thank you to everyone who has donated – we couldn’t be happier.”

The Thames Waterbike Challenge started at Thames Head, in Gloucestershire.

The longest day consisted of a gruelling 13.5 hours in the saddle – from Folly Bridge in Oxford to Caversham Lock in Reading. They cycled on water alongside boats and through a total of 45 locks.

Wakefield said: “I can’t even put into words how it felt to be part of the Epic Thames Waterbike Ride.

“It really was the experience of a lifetime but also the toughest thing I’ve ever done. We pushed ourselves harder than ever before to complete this and raise as much money as possible for Ben.

“Huge thanks to everyone who donated, your support means the world to us, to Ben and to everyone that Ben supports.”

Matt Wigginton, business development director at Ben, said: “We are in complete awe of Tim, Jon and Darren for taking on such an epic challenge to raise money for Ben.

“Cycling on water for over 10 hours a day on one of the busiest rivers in England is extremely tough.

“We really appreciate the support from all at Volvo Car UK, Allianz Partners UK & Ireland and Group 1 Automotive.

“I would like to say a heartfelt thank you from everyone at Ben, you guys are all amazing. The next Industry Leader Challengers (for 2020) have big shoes to fill that’s for sure.”

There’s still time to support the efforts of Guiver, Tozer and Wakefield. To sponsor their efforts visit https://www.justgiving.com/fundraising/benilc2019.