Down on the Ferrari farm with DK Engineering 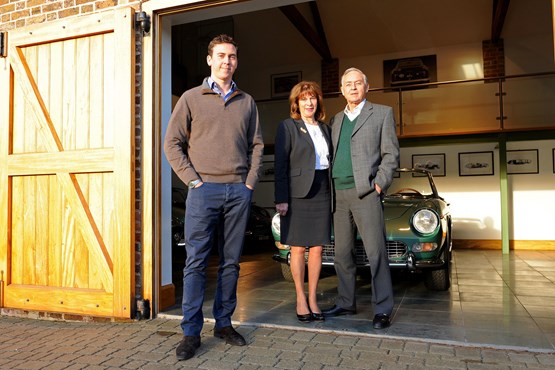 When it comes to Ferrari, DK Engineering trades on its expertise, so it is hardly surprising to learn its clients have included designer Ralph Lauren, singer and guitarist Eric Clapton and presenter Chris Evans. The company also brokered the sale of one of the world’s most valuable cars, the Ferrari 250 GT SWB driven to victory at Goodwood by Stirling Moss in 1960.

With such credentials, you may expect to find the business housed in a glass palace. In fact, DK Engineering’s understated showroom operates from a converted farm on the edge of the Hertfordshire commuter village of Chorleywood, a stone’s throw from the Chilterns.

Despite its close relationship with Ferrari, the place has a gentlemanly charm that feels distinctly British, perhaps more suggestive of Bentley and Rolls-Royce. However, the passion exuded by the

business’s owners for the ‘Prancing Horse’ is very much in keeping with the cars’ Italian origins.

Founded in 1977 by David Cottingham and his wife, Kate, DK Engineering specialises in collectable sports cars, mainly Ferraris. All three of their sons – Justin, Jeremy and James – either still work or have worked for the company. James, DK Engineering’s senior vehicle acquisitions specialist, is now steering the business into its next stage.

From service to sales and beyond

The business employs 32 people – three, including James, are in sales, seven are office staff and the rest are engineers, who  do everything from regular servicing to intricate restorations.

James said that although two thirds of the staff work on the engineering side of the business, the profit split between retail and restoration/servicing is “probably 50:50”.

James said: “We started as a service facility, but now we buy, sell, restore, store and race-prepare Ferraris. We can help with anything Ferrari-related. We stock other cars, such as Lamborghini, Porsche and McLaren, but we are known throughout the world as Ferrari specialists.”

Over the past four to five years, DK has been selling about 200 cars a year,  double what it sold before that. It stocks about 35 cars in its three showrooms at any one time.

Due to low interest rates, an increasing number of Ferrari owners are using finance to fund their purchase, which means their capital isn’t tied up unnecessarily. DK estimated finance was used for about one in 10 of all sales, a figure likely to remain stable.

For those looking to restore their cars, often the equity can be released in the vehicle to fund the restoration.

James said: “Ferrari owners are well known for re-investing in their cars. On average, it costs £300,000 to fully restore a 1960s Ferrari and takes 18-24 months, but if that car is worth over £1 million, it makes the investment worthwhile and owners will always take measures to protect their investment. It’s as good a time as ever to buy such cars.

“We do, however, discourage buyers from purchasing purely as an investment. We want to sell to petrolheads who understand and enjoy these cars. The investment is a bonus.”

Many of its clients are international – from Japan, the Middle East, Far East, Singapore, Australia and America – but the majority are in the UK.

Some owners from countries where the climate does not suit classic cars entrust them to DK for storage, only using them when they visit the UK.

It is not unusual for particular vehicles to pass through DK Engineering a number of times as they are bought and sold. James and his sales colleagues will often hunt down a specific model for a client, making an approach to a car’s owner to gauge the willingness to sell and then managing any subsequent negotiations, the final transaction and the car’s transportation.

“Around 30% of our sales involve following up leads for someone who has requested something specific, sometimes it can be an exact car,” said James.

“The product we sell is finite; there are only so many in the world, especially the collectable Ferrari models, and it’s a very small and connected world, so we know all the Ferrari cars which have ever been built, certainly those from the 1950s and 1960s, intimately.

“At some point, most of these cars have passed through DK Engineering and it means the knowledge we have amassed is possibly the most extensive in the world, which puts us in the best place to acquire particular vehicles for our clients.”

Perhaps most memorable was the sale in 2012 of what James refers to as one of the most important Ferraris in existence. The sale of the blue all-aluminium 1960 Ferrari 250 GT Short Wheel Base in which Stirling Moss won the Tourist Trophy at Goodwood in 1960 made national news headlines.

The car was sold to Ross Brawn, the Formula 1 managing director of motorsport, but DK Engineering would not disclose for how much. However, at the time of the sale, The Daily Mail put the figure at more than £7 million.

Where retail and racing meet

Not surprisingly, motor racing beats at the heart of the company, with clients asking the company to race vehicles on their behalf and business often taking place at race meets. Currently, DK races a Jaguar E-Type and a 1957 Ferrari 500 TRC.

David said: “Years and years of going to motorsport events and classic car meetings as well as being active on the circuit ourselves have resulted in us forming close relationships with Ferrari owners from all over the world. It has very much been the foundation of the business.”

James crossed the finish line at Goodwood Revival last year in first place, adding more silverware to an already well stocked trophy cabinet. By the end of last season, DK’s 500 TRC had completed more than 100 races while the team also prepared and raced a 355 Challenge on behalf of a client at the Ferrari Formula Classic.

David said: “Owners like our racing credentials. The fact that we can apply on-track experience to what we do in the workshop has always been one of our selling points.

“Today, James very successfully reinforces our race track presence and experience with social media. I used to network with owners by attending car club meetings, now much of that job is done by social media, although playing an active part in the race scene continues to be an important part of the business.”

The business came into being as a result of David, then a research physicist for Kodak, and Kate’s love of racing, with the pair owning and racing a number of Jaguars. Eventually, the hobby became their business.

While James recalls returning from school and heading straight to the workshop to see the latest Ferraris being restored or sold by his father, he had not intended to head straight into the family business after graduating in mechanical engineering from Bristol University.

“I had always intended to work somewhere else first, but when I finished university I project-managed our move to our current site in 2007. At the time it was a derelict farm. I had it restored to how it is today and it now houses the main part of our business.

“When that project finished, the economy was in its downturn and I naturally slipped into working for the business full-time.

“It was a very tough time for us and business didn’t start to pick up again until the following year. I’m actually very happy that I experienced the downturn whilst being part of the family business. My parents had seen it all before and weathered previous storms, but this was new to me.

“Being able to experience the tough times first-hand was a valuable learning experience.”

Does DK see Brexit bringing those tough times back?

“The deflation of the pound against the euro did have an impact,” said James. “But generally our business is quite robust and we don’t think Brexit will have a profound effect.

“We deal mainly in collectables and they continue to rise in value. The cars we handle are a mobile asset, buying and selling such cars is undertaken on a global scale and the seller is not restricted to any one market, so if the value of a car is affected in one country, it can always be sold in another.”

DK Engineering was originally based at a large industrial unit in Watford and there was no showroom, but when it began selling as well as servicing and restoring cars, it was apparent a showroom was needed.

The first showroom was based out of David and Kate’s farm, with an off-site workshop about a mile from the main business, which still forms a vital part of the operation.

James said: “When we renovated, we were way ahead of our competitors in terms of how we structured the workshop and having showrooms alongside. Now, of course, everyone else has caught up and upgraded their premises.”

James is overseeing a further refurbishment with a £1 million investment that will create the extra space the business needs.

David said: “We are constantly moving cars around, which takes up so much time. At the start of each day, we move cars out of the building to where they need to be and then at the end of the day we move them back in.”

While neither David nor James anticipates a dramatic increase in sales, servicing or restoration projects this year, the refurbishment, which adds doors that provide better access to the workshops, another five ramps and an indoor car wash facility, will mean the business can operate far more efficiently, freeing up engineers’ time to concentrate on restoration projects, servicing requirements and sales preparation.

James said: “We were working on eight different restoration cars during 2016 and more than 500 service cars, including  sales work.

Engineers are either ‘home-grown’ through its apprenticeship scheme, recruited from the franchised network or transfer from the motorsport sector. DK has a long history of apprentices, on average recruiting at least one a year and having around three at various stages of training in the business pretty much constantly.

Once qualified, the apprentices will usually specialise in either the day-to-day servicing or in restoration.

“The emphasis is very much on quality rather than quantity and for many coming from the franchised network, that’s a shock,” said David.

“Motorsport has a lot of synergy with our business and we recruit technicians from there including those who have undertaken degree courses at places like Oxford Brookes University and Brooklands, but those skills are becoming increasingly harder to find.

“Thirty years ago, we would recruit people with City & Guilds qualifications from the technical colleges and there was plenty of choice. Young lads would be queuing up to work for us, but now we really have to search high and low to find young people with the passion and potential as well as the repair skills rather than those who simply replace the parts.

“It is pleasing to see that the apprenticeship is making a comeback, so perhaps there will be more people with the skills we need going forward.”

Technicians are not the only things that can be difficult to source James said: “Parts are sourced from various places including Ferrari, our own stock and lots of original parts we overhaul and re-use.

“We have two parts men who source required parts and the technicians will overhaul or fabricate parts if required. We often produce small batches of parts when we are unable to find them.”