Spyshot: SRT at work on Cherokee and 300C

Was this article useful?
Click the thumbs up >
Chrysler Group plans to mix it with Europe's power brokers, using its growing SRT performance range. Both the all-new Jeep Grand Cherokee and Chrysler 300C are getting the Street and Racing Technology treatment, following on from the supercharged 347bhp Crossfire SRT-6 shown at Geneva.

The new Grand Cherokee has ventured into Death Valley to hot weather test the 6.1-litre HEMI. Disguise hides the new twin bulb, Land Rover-esque lamps, but the gaping lower air scoop is impossible to miss. Power is channelled to all four wheels via a five-speed automatic ’box.

A Porsche Cayenne Turbo rival would have been unthinkable on the outgoing big Jeep, but the 2005 edition promises to be far sharper dynamically. The new, independent suspension front and rear combines greater stiffness with increased wheel travel, to improve refinement and on-road precision. The Grand Cherokee also gets rack and pinion steering, for quicker responses and a reduced turning circle.

Other developments include ESP, a crisper look and a fast windscreen to improve aerodynamics. The new model, also running the Cherokee's 208bhp 3.7-litre V6 and a new 3.0-litre diesel, hits the UK next summer.

While the Grand Cherokee SRT-8 is still under wraps, above left is the first official picture of its hot 300C counterpart. Chrysler is predicting a 0-62mph sprint in less than 5.5sec. The suspension is beefed up with stiffer spring and damper settings. 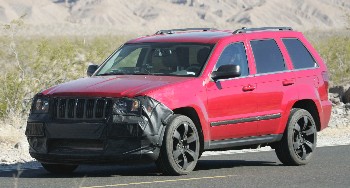 ENGINES
HEMI V8 bored out to 6.1 litres, while new intake and exhaust systems and a higher redline help produce 425bhp.

...AND INSIDE
Sports seats get suede inserts, while leather trim adorns the wheel and gear shifter.