All eyes on September, as August new car market dips 4.9%

Was this article useful?
Click the thumbs up >
Car dealers are expecting September to be one of the hottest months of the year for car sales, following a cooler August.

According to Alan Pulham, franchise dealer director for the Retail Motor Industry Federation (RMI), September will be a different story: 'Consumers have been biding their time, waiting to take advantage of the super September offers, and to be the first to get the new 54 number plate.'

He continues: 'August is also a time for holidays, and many people who might have bought a car during last month were away. Now they are back they will be keen to get into dealer showrooms, to make up for lost time!'

August saw a cooling in the new car market as buyers held off purchasing until September and the plate change.

SMMT chief executive Christopher Macgowan says: “Until the industry moved to a twice yearly registration plate change, August was the month to watch. Now, its significance is dwarfed by the key September market.

“Growth that has sustained the market for the last four years has eased a little in recent months and it will be the September figures that tell us if a strong start to 2004 will bring a fourth consecutive record year.”

During August the fleet sector reported its fourth successive monthly increase. The 4.3% rise marked the seventh increase in the first eight months of this year.

Over the year-to-date business volumes have shown the strongest growth, up 11.7%, despite a modest dip during August.

Private registrations were down in August following three consecutive years of growth. Year-to-date volumes remain strong, marginally down on 2003 figures.

Since the start of the twice yearly plate change in 1999 the September market has on average accounted for 17.1% of the annual market, at 411,157 units.

Current expectations are for a market on par with last year's 439,365 units, in the 430,000 to 440,000 unit range. As in the housing market, the new car market has started to cool and the effect on consumer confidence of interest rate rises may be filtering through to sales, particularly within the private sector.

Diesel car registrations rose for the 47th successive month in August. Their 12.6% rise to 27,234 units in August maintains the double-digit growth run recorded in every month of 2004.

Diesel penetration climbed by approximately five percentage points in both the month and year-to-date to 32.0 and 31.3% respectively. Diesel volumes have increased by 86,600 units during 2004. 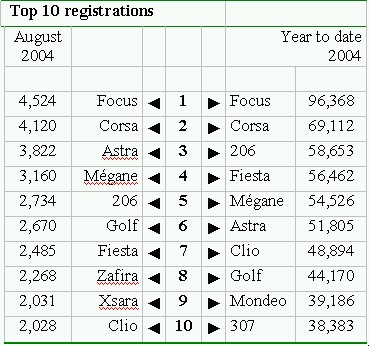 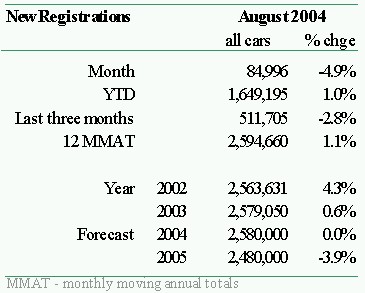 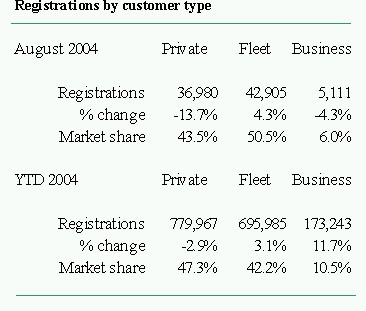