Was this article useful?
Click the thumbs up >
The flagship Clio – remixed by Renaultsport – has broken cover. The supermini hot hatch has surfaced at the Nürburgring, an unusual move for Renault, which tends to stick to its French proving grounds.

Testing at the hallowed German track is a sign that Renault won’t wimpishly relinquish its position as the enthusiast’s choice. Indeed, insiders vow the intention is to match the rorty, chuckable nature of today’s car.

The look is faithful to the ‘concept’ which whetted our appetite at Frankfurt. The deep, mesh-filled bumper with twin spot lamps, vent behind the front wheelarch and sculpted side sills have all made the grade. So has the underbody diffuser, which looks like it’s been lifted from a Ferrari and should sucker the Clio to the ground. There’s only one obvious change and that’s no deal breaker – the wing mirrors are less slimline. 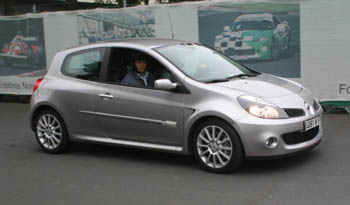 Our spies at the ’Ring say the Clio could even prove a handful for more powerful hatches like Ford’s forthcoming Focus ST. True to form, the Clio RS sticks with its 2.0-litre fourpot, forsaking forced induction like many a hot hatch. The high-revving lump produces around 190bhp, sending its power to the front wheels via a six-speed manual ‘box.

The Clio weighs around 1100kg, so it should undercut the big boys on power-to-weight. Expect the 0-62mph benchmark to be despatched in around 6.5sec and a top speed close to 150mph. Brembo brakes will haul the hot hatch to a halt.